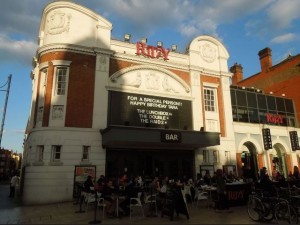 Workers at Brixton's Ritzy cinema no longer face compulsory redundancies after the cinema’s owner, Picturehouse, backed down on threats to shed up to 34 staff. The threats of job losses came after a successful campaign for workers to earn the London living wage (£8.80 an hour).

On Tuesday, staff were presented with letters threatening compulsory redundancies, which campaigners argued was contrary to an agreement reached on the dispute through the conciliation service, ACAS.

The cinema was facing the prospect of further strikes and boycotts with politicians and celebrities, including Will Self, condemning the cinema’s actions — before the dramatic u-turn.

“Group management was not aware of plans to enter consultations for redundancies at the Ritzy, which is managed by Picturehouse. I am now making this a group matter and I have decided together with Picturehouse management to put an end to the consultation process.”

However, the union representing workers at the cinema have remained cautious. Willy Donaghy of Bectu said:

“We welcome this development but the union will not drop plans for a strike ballot until we get guarantees about our members’ long-term job security.”

This new twist in the ongoing dispute comes as Curzon, the art house cinema chain agreed to pay its staff the London living wage following a similar dispute. Their CEO, Philip Knatchbull, said:

“This could not have occurred without the support of our shareholders who will subsidize the cost of doing this in the short term until the cost is self-financing through the better quality of work we think paying people properly will engender."

Image by Wright Archive from the Londonist Flickr Pool