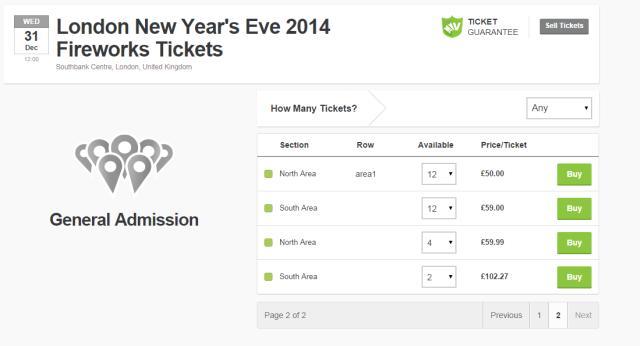 Did you get your tickets for the New Year's Eve fireworks on Friday? If not, they're still available via SeeTickets for £10 each — or you could pick some up on resale sites, where some entrepreneurial souls were at one point flogging them for up to £500 each. Sorry, did we say entrepreneurial? We meant shameless profiteering.

Despite the Greater London Authority website saying tickets are for personal use, and that reselling breaches terms and conditions, there's no mention of sanctions for anyone doing just that — just a plea to "purchas[e] responsibly". Mayor Boris Johnson was asked at last week's Question Time about measures to prevent touts and resellers taking advantage of the event, but was unable to provide any information. Presumably because there was bugger all to say.

Mayorwatch spotted some tickets on sale for £170 each on viagogo and the Guardian claims to have seen tickets available for £612 each. The highest price we can find at the time of writing is £102. Again: if you want to shell out for something that's been free since 2003, is being paid for out of public funds (the charge will apparently barely cover the admin cost of this highly secure* ticketing system) and is basically the right to stand in the cold and watch pretty lights, tickets are still available via the proper channels for the official price.