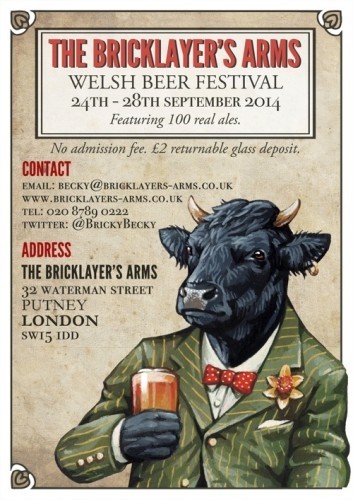 Opportunities for summery outdoor drinking might be on the wane, but there’s still plenty of beer to be consumed. Here’s our pick of some of the more interesting beer festivals in London this month — let us know in the comments if we’ve missed anything worthwhile.

Founded in 2004, Twickenham Fine Ales claims to be “London’s oldest micro-brewery”. The veracity of this probably hinges on whether or not you consider Greenwich's Meantime Brewing Co (founded in 2000) to be a ‘micro-brewery’, but let’s not get bogged down in pedantry – Twickenham have been producing great beer for a decade, and who wouldn’t want to celebrate that? Aptly enough their 10th birthday party promises 10 different ales, as well as live music, hot food, and ‘impromptu’ brewery tours. The event runs from midday until 7pm, tickets cost £10 in advance (including a pint glass and three pints).

This CAMRA festival takes place a mere stone’s throw from Eden Park station, and intends to adopt a ‘transport theme’. We’re not entirely sure how this theme will play out, but at least one important thing is clear: the beer list looks very promising, with somewhere in the region of 60 real ales sourced from around the UK (including two vegan beers), as well as a separate bar for ciders and perries. Admission costs a mere £3, or nothing at all if you’re a CAMRA member. See the festival’s poster for more details.

Less than six months after its last one, the Clapham branch of Craft Beer Co will soon be holding another Craft 100 festival. The premise is straightforward, even if the execution might not be: for four days the pub will aim to make 100 different beers available simultaneously. Entry to the festival is free, although you’ll need to pay a deposit for your glass (or bring along a glass from April’s Craft 100 festival, if you have one).

Craft Beer Co is not the only pub intending to serve a century of beers this month. Putney’s oldest (and probably best) pub, the Bricklayer's Arms, is also aiming to make 100 beers available in its five-day festival towards the end of the month. Notably, each beer in the festival’s figurative ton of ales will originate from Wales, which is no mean feat. Again admission to the festival will cost you nothing apart from a deposit for a pint glass.

A handful of London pubs are hosting some smaller-scale beer festivals this month. Two are in Ealing: the Forester’s beer festival promises a hog roast, a barbecue and live music over the first weekend of September, while the New Inn will be providing similar attractions on the last weekend of the month. In Stockwell, the Priory Arms will be conducting an Oktoberfest-themed celebration of German real ale for a full 10 days (19-28 September). Finally, Hop Back Brewery’s only London pub, the Sultan in South Wimbledon, will be dispensing more than 18 different cask and keg beers from 25-28 September.

If you’re a lover of beer or pubs, why not buy the Londonist book of London pub crawls for less than the price of a pint.