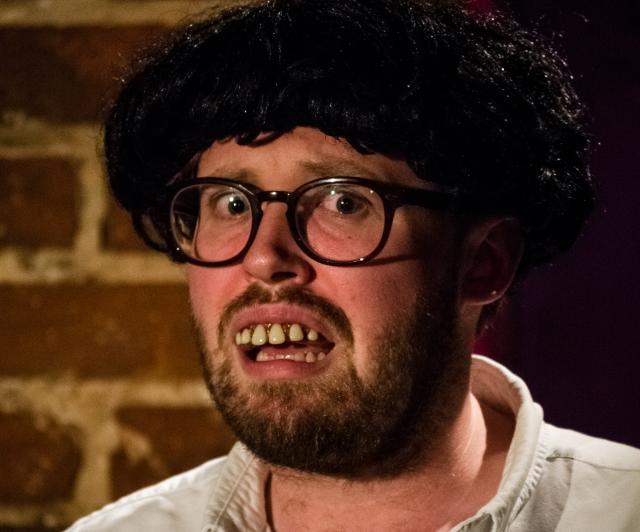 “I'm letting you in,” says John Kearns at the start of his stand-up show Shtick, which comes to the Soho Theatre via an award-winning run at the Edinburgh Festival. It’s a strange declaration considering we’ve just watched him putting on a monk’s wig and goofy false dentures. It feels like the cartoon garb should be about to help him create a buffoonish comedy character to play with, and though he does dally with that idea a little (telling us he’s “the guy at the pub who talks to the fruit machine”), Kearns’s costume does not obfucate who he is, but rather frees him so he can be more himself.

If that sounds weird then just go with it, because it sets the tone for a delightfully unpredictable hour of peculiar, whimsical and gently-confessional comedy. There’s a bit of everything here: surreal flights of fancy (thoughts on a dog driving a train), piquant observations (the sinking feeling he had as a child when his mum left him at the checkout to go and get an extra item), plus traditional set-up/punchline style gags. But it’s the way Kearns tells us about the jokes that makes him such good company. There is a bubbling strand of chummy meta-comedy — think Stewart Lee, but nice — for example, he leaves his ‘worst joke’ in the set in order to tell us it is just that, and continually comments on his performance and ours as an audience (“I’ve done this show 50 times and you are quiet” — after which we all perk up).

This ‘shtick’ allows him to get to the true epicentre of the show, where he explains who he is, how important comedy is to him and how his life has changed since getting up on stage. It’s a rather lovely approach — matey, charming and occasionally angsty, as if he can’t quite keep up the front that a stand-up comic is supposed to have, slipping back into normalcy whenever the surface cracks. Of course, that in itself is part of the act, so you will leave a bit confused (though there’s nothing wrong with that).

There is a bit of a filler in the show, and the pops at Russell Brand seem a bit beneath him; equally, there will be a lot of people who just don’t get it, especially now that there’s such hype. But the hype will no doubt soon fold itself into Kearn’s sideways self-analysis and you know he’ll have an interesting, pleasingly wacky take on that too.

John Kearns: Shtick is on at the Soho Theatre until 18 October. Tickets £10-£15. Londonist saw this show on a complimentary ticket.