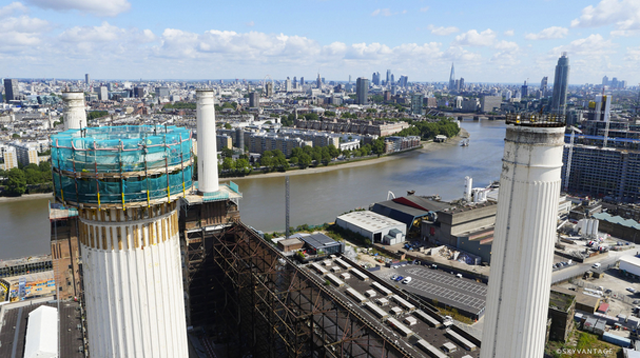 Work to dismantle the south west chimney at Battersea Power Station has started — the first of the iconic towers to be removed as part of an £11m project.

The five-month demolition process involves a circular rig slowly ‘munching’ its way down the chimney from the top — with debris funnelled down a chute in the centre of the chimney.

Once it has been removed, a specialist 'jump rig' will be installed to rebuild the structure — 1.22m at a time — returning it to its 101m glory. It will take six months to rebuild.

Dismantling of the other three chimneys will start once the south west tower has reached a height of 35m.

Decades of corrosion caused by sulphurous smoke emissions have led to the chimneys — a key part of the London skyline — becoming unsafe. They are being replaced as part of the 34-acre site's £8bn transformation into a new district, featuring flats, shops, parkland and cultural venues. The power station is being rebuilt at a cost of £750m — if you want to see what it'll look like, we featured a gallery of artist's impression images in November.

The Malaysian developer behind the project has set aside money in a bond to ensure the chimneys are rebuilt even if the firm goes out of business — a curse which has befallen previous developers.