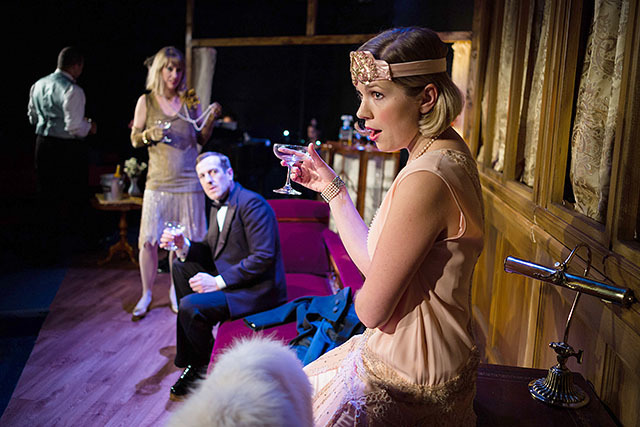 Formed five years ago to present a small-but-perfectly formed La Bohème in a room above a Kilburn pub, OperaUpClose has gone on to have great success with pared-down versions of Carmen, Tosca and Don Giovanni. Following the company's award-winning template, this Traviata does away with extravagant party scenes and gypsy choruses, and confines the action to one room-sized set populated by just five singers and three musicians. The result is an intimate production with the performers thrillingly exposed and Verdi's music firmly centre-stage.

With no set and no orchestra to hide behind, the production leans heavily on the talents of its small cast (or rather casts — there are three performing in rotation). Tuesday's Violetta, Louisa Tee has a supple, shimmering voice that easily rides Verdi's emotional swoops and runs. There are strong vocal performances, too, from Flora McIntosh (Flora) and James Harrison (Germont).

As Alfredo, Lawrence Olsworth-Peter lacks the resonance of his fellow cast-members, and takes a few scenes to find his pitch; with Tee outclassing him every time she opens her mouth, the pairing doesn't make complete sense either vocally or narratively. Special mention must go to the "orchestra" of three instrumentalists; the chamber-style arrangement of Verdi's score was a delicate treat.

Theatregoers who have previously been put off opera by its reputation for histrionic bombast should give this production a go. Lavish productions in large opera houses require the cast to project towards the back of the amphitheatre rather than emote naturally; by letting the audience come closer to the stage and the performers in physically intimate theatre spaces, OperaUpClose lets us come closer to the dramatic essence of its narrative.