Where To Do Extreme Sports In London

When Boris et al. were talking about the 'London 2012 Legacy', we don't think that paintballing and scuba diving were what they had in mind. But if the recently opened Queen Elizabeth Olympic Park doesn't float your boat, and you're looking for something a little more extreme than a jog around Hyde Park, these sports may be for you.


Have you seen our round-up of the best climbing centres in London? If you're feeling braver than a static climbing wall, how about venturing Up At The O2 (from £26) and becoming one of those silhouette ants you've probably seen on top of the dome in the last year or so? We had a go, and it's not quite as intrepid as the marketing would have you believe. Don't be expecting a great view of the city either — the skyscrapers of Canary Wharf block most of the interesting sights out...unless you find the skyscrapers of Canary Wharf interesting.

The ultimate climbing experience London has to offer must be Vertical Chill, the ice wall tucked away at the back of Ellis Brigham in Covent Garden. Beginners are welcome and the cost is £50 for a one-to-one session, £35 as part of a group or £25 if you’re a pro and already have all your own gear.

If working with gravity, rather than against it, is more your style, what about abseiling? Plenty of charities run sponsored abseils down various  London landmarks from time to time — keep an eye on the 'Good Cause' section of our daily email. For a real challenge though, try Rap jumping (from £45), described as an extreme version of forward abseiling, at The Castle Climbing Centre in Stoke Newington. If you're still up for it after watching this video, we salute you. 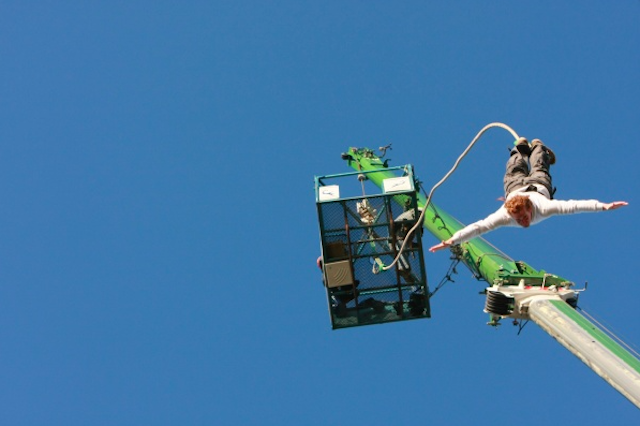 For one weekend every month, it’s possible to bungee jump next to the O2, thanks to UK Bungee Club. The roughly 50m jump is over an air bag, rather than the Thames, so no fear of getting a mouthful of London's finest. It's £75 to go it alone, or £150 for a tandem, but the jumps do tend to get booked up a few months in advance, so once you've summoned up the courage, go ahead and book straight away. See future jump dates.


Lee Valley White Water Centre, the venue for watersports during London 2012, offers several boat-based activities including canoeing, kayaking and rafting. Sure, being in Hertforshire, it's a little outside of London, but it sure beats risking a fall into the murky waters of the Thames. From £49.

Also available is the chance to ride a speedboat down the Thames. You might not ooze the style of David Beckham in the London 2012 opening ceremony, but if you close your eyes (and breath through your mouth), it's almost the same as banana boating in the Bahamas. The 40 minute ride takes you on a return trip from St Katharine's Pier to the Thames Barrier. 35mph may not seem fast on land, but it's a heck of a lot faster when you're low to the water. From £39.95 per adult.

London City Scuba is based at Golden Lane Leisure Centre in Barbican. Everyone from beginners to experienced divers can join the club, which is a branch of the British Sub Aqua Club. Don't worry if the thought of an inner city swimming pool doesn't quite match up to your expectations of scuba diving — the club organises one UK and one foreign diving holiday each year.

Alternatively, Clidive is also a BSAC club, and meets at Ironmonger Row Baths near Old Street every Thursday. 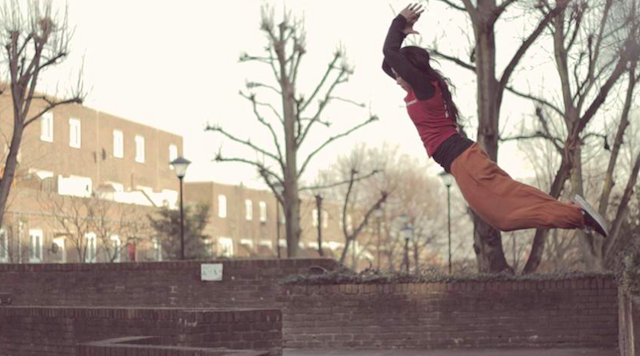 Parkour is the practice of using momentum to move from one place to another in the most efficient way possible. Parkour Generations runs several classes in London every week, for Parkour-ers of all backgrounds, including beginners, either indoors or outdoors. Begin indoors, practising moves on frames, before progressing outdoors, using walls and structures around the city for momentum.

A staple of stag dos for a few years now, paintballing is gradually opening itself up to the masses. Bunker 51 in Greenwich is a decommissioned nuclear bunker that offers paintballing with a zombie apocalypse theme. Prices start from £25 off peak, with extra ammunition available to buy. The venue also offers Laser Tag, for the less-fond-of-bruises.


Head East to release your inner speed demon at Revolution Karting in Mile End. The outdoor, electric, floodlit course starts from £25 per person, and is available for private hire for parties and corporate groups, and there are also open racing and under 18 sessions for budding Lewis Hamiltons. If you're likely to want to relive your lap later, you can pay extra for a helmet cam. 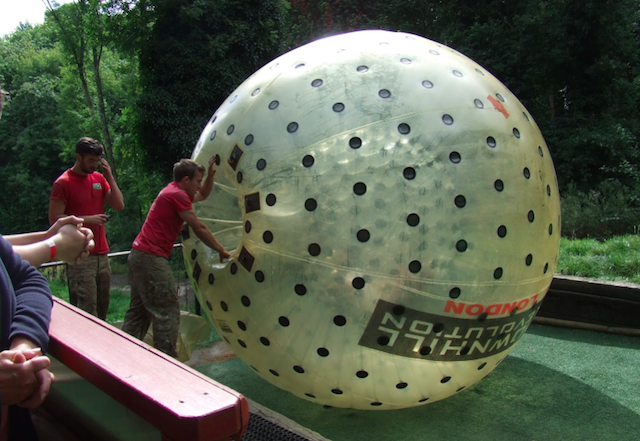 For the uninitiated, zorbing is the act of climbing into a giant inflatable ball called a zorb, and rolling down a hill inside it. As much fun as we reckon it would be to zorb down Parliament Hill or Greenwich Park, the closest zorbing experience to London is Go Zorbing based at Whyteleafe in Surrey. Prices begin from £49.99 for one ride for two people, which sees you and a friend (or enemy, depending on your feelings towards zorbing) strapped into opposite sides of the same zorb. For extra pizazz, try a Hydro Zorbing experience. It's the same price and the same principle — you just have 40 litres of water sloshing round inside the zorb with you.

While it is often suggested that cycling on any of London's roads can be considered as an extreme sport in itself, there are venues in London which allow you to take this one step further. Herne Hill Velodrome is not as steep-sided as other velodromes, so is the perfect place for beginners to get into track cycling, and there are classes for ages two years upwards. Inductions begin at £10, see the full schedule here.

Lee Valley Velopark rose to fame as one of the venues in London 2012. It is the first venue in the world where you can try out track cycling, road racing, BMX and mountain biking all in one place. To take part in all activities, you have to first apply for membership (free). Mountain biking is £15 for a taster session or £6 for a pay-and-ride session, giving you access to the mountain bike trails around the Velopark, and BMX sessions cost the same.

Ever taken part in another extreme sport in London, or is there something you'd like to be able to do that this fine city doesn't (yet) offer? Let us know.