If you’ve not already done so, you can subscribe to these daily listings and have them delivered to your inbox at 7pm each evening, so you have enough time to plan for the day ahead. Alternatively, subscribe to Londonist Daily to hear about events further in the future. And help spread the word to your friends who haven’t discovered us yet! 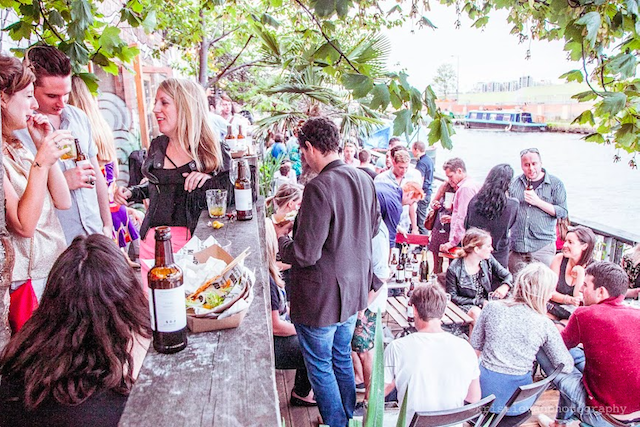 BLOOD: Today’s opportunities to donate blood are at St Olave Parish Church in Fenchurch Street, Sacred Heart Presbytery in Wimbledon and Morrisons in Thamesmead. See site for terms and conditions.

SUFFRAGETTE FESTIVAL: This East London-based festival celebrates 100 years since the East London Federation of Suffragettes was independently established in Bow by Sylvia Pankhurst. There are walks, talks, exhibitions and workshops, and most events are free or cheap. Check website for full events programme. Until 10 August

FILM FESTIVAL: Brixton Revolutionary Film Festival is a one day fundraising event at Brixton Commuity Kitchen. Films on the playlist include FOOD INC, which explains capitalist food production, and La Haine, which shows the clash between corrupt police and youth in a French ghetto. £5-£10, just turn up, 12pm-9pm

COTE D'AZUR:  Flamingo Pier brings a slice of the Côte d'Azur to Hackney Wick with food and drink from the south of France and French disco and house music. There's a new cocktail bar plus street food vendors selling French specialities. Takes place at The Counter Cafe in Hackney Wick. £5, just turn up, from 6pm

MUSEUM LATE: Tate Britain presents a Museum Late that explores youth culture and the position it occupies between social structures and cultural boundaries. Expect an evening of exploratory spoken word and sound inspired by the artwork in the Tate Collection from a mix of storytellers, poets, beat boxers and musicians. Free, just turn up, from 6pm

COFFIN DODGERS: Ever been told to act your age? Well, if you're over 28, you can at tonight's Coffin Dodgers Disco at The Phoenix on Cavendish Square. Dubstep, electro and house music is strictly forbidden. Instead, expect to hear old school pop (Belinda Carlisle, eat your heart out), rock, Motown, and maybe the odd power balled. £7, prebook, 10pm

SPECIAL SCREENING: Phoenix Cinema in East Finchley hosts a special screening of the 1957 film Nights of Cabiria. It's about a prostitute looking for love on the streets of Rome. The film is in Italian with English subtitles and will be introduced by actor and screenwriter Mark Gatiss. £7-£9.50, prebook, 11.45pm

BEAT THE HEAT: Survive the sweltering weather with one of our favourite ice creams, enjoy a breeze at a rooftop bar, take a dip in a lido, sip an icy cocktail or just soak up the sun in a beer garden.

Find more London events in our Free & Cheap events listings. Want to see your event in these last-minute listings? Email us at hello@londonist.com at least 48 hours before the event, and we will consider it for inclusion. Note, due to high volumes of email, we can’t always reply.

London’s biggest performing arts festival, Camden Fringe, started on 28 July. Everyday throughout the festival, we’ll be bringing you our pick of shows to catch that day. Today’s suggestions are below:

Paolo Ferrari's Urban Buffoon is an outdoor show — a vivacious post-Brechtian tale of exploration and discovery set to analyse society's regression to mediocrity, in a metaphysical and symbolic way. No, we're not sure either, but apparently you can expect the 'odd dick joke', so should be fine. Meet on the corner of Parkway and Camden High Street, opposite Camden Town Station. Until 24 August

Nothing To See Here focuses on the loss of imaginary friends as we grow up into adulthood, and explores the relationship between self and unconscious. At Etcetera Theatre, until 3 August

Book now for tomorrow's Footprints of London walking tour in aid of Amnesty International. Starting in front of Guildhall Library, the theme of the walk is Women Through Time. Guide Tina Baxter will talk about women associated with the City of London, over a period of 1,500 years, who have inspired change in some way. Some subjects are well known, others you are unlikely to have heard of. Tickets are £10 — which goes to Amnesty International — plus booking fee, and need to be purchased in advance.

Sadly our Secrets of the Underground video series has now come to an end (although watch this space for future treats starring everyone's favourite London transport geek). In the meantime, learn all manner of Bakerloo Line trivia with the Secrets of the Bakerloo Line video.