The Garden Of Eden In Lambeth North 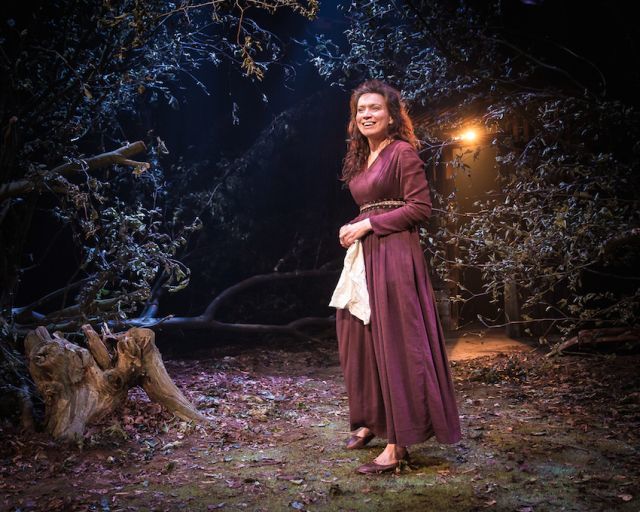 The scene is strangely reminiscent of the Garden of Eden. A man and a woman, both stark naked, lie in the branches of a tree, while the man talks to an angel — Gabriel, or perhaps Raphael. The angel has blue eyes and dark ringlets, but it seems only the man can see him.

Who else could this be but William Blake and his wife Catherine, in their cottage at Hercules Buildings, on the edge of Lambeth Marsh. It is the turn of the 1800s, the age of revolutions, and south London simmers with dissenting politics, reactionary mobs and dark, fantastical visions. Out of the Lambeth night, pursued by torch-burning locals, a stranger arrives hot-foot from the Elephant and Castle. The uninvited guest is Tom Paine, the most dangerous man in England, whose philosophy of the rights of man has taken him from rural Norfolk to the heart of the French and American Revolutions.

Director Michael Kingsbury has revived Jack Shepherd’s 1989 play In Lambeth, only a short walk from the site of Blake’s garden near Lambeth North tube. The play imagines a meeting between Blake and Paine, two revolutionaries with very different styles. Representing events and personas with scrupulous accuracy, Shepherd’s writing brings maverick historical figures effortlessly to life. Paine, played by Christopher Hunter with an extraordinary and entirely appropriate Norfolk-American accent, is buttoned up in a frock coat and encased in a layer of steely determination. At first he is uneasy in the company of the unclothed Blakes, but recognises that the fault lies with his own prejudice. Blake is half in Lambeth and half in Eden, arguing passionately with his guest, as well as with his long-dead brother and an archangel. While Paine’s fight for equal rights is a rational quest for order, Blake’s sees the universe within himself and slips between realities. Can his vision of truth have any part to play in a society demanding justice?

The acting is exceptionally good. As well as Hunter, reminiscent of Bob Peck who created the role, Tom Mothersdale’s curly-haired, unworldly Blake creates a comprehensible character from London’s favourite mystic. The key to the play though is Blake’s wife Catherine (Melody Grove) who, despite her own illiteracy and ordinary background, has joined her life to that of a man who, much of the time, operates on another astral plane. When the mob arrives at the garden door, it is Catherine who sends them on their way with the kind of language they understand.

In Lambeth is an excellent reminder of a satisfying, highly intelligent play. Pacing becomes a problem at times, but any weaknesses are more than countered by the clarity of the writing and the strength of the performances on a set consisting mostly of actual trees. Jack Shepherd is not only an under-rated actor but also a writer whose work is due serious attention. In Lambeth is exactly the play you would hope to find at the Southwark Playhouse — local, top quality, politically charged drama.

In Lambeth by Jack Shepherd runs at the Southwark Playhouse, 77-85 Newington Causeway, London< SE1 6BD until 2 August. Start times of 7.30pm and 3pm for Saturday matinees. Tickets £18 or £16 (£10 concessions). To book call 020 7407 0234 or visit the Southwark Playhouse website. Production image by Kim Hardy. Londonist saw the production on a complimentary ticket.