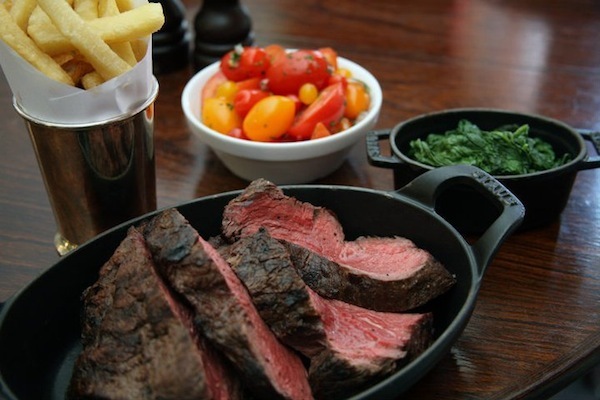 Now that the fifth branch of Hawksmoor has opened in the capital, we probably ought to be considering it a chain. Especially given there’s another one due to open in (gasp) Not London next year*.

Don’t let that put you off, though. Rather than of thinking of the increasing number of restaurants as a bad thing, instead consider that it means it’s easier to get a table when you want one, and that you’re never too far away from a hit of top-notch steak.

This western outpost follows locations in Spitalfields, the City, Covent Garden and Mayfair, and it might just be the best one yet. The subterranean restaurant channels the glamour of 1920s London in its style, featuring wood-clad walls, the kind of up-facing lights that reminded us of those in tube stations such as Tooting Broadway, and elegant arched windows in place of a more functional kitchen pass.

The menu is just as decadent, with the likes of seafood platters, steak tartare and smoked salmon acting as warm-ups to the main attraction. Vietnamese-style oysters are a thwack to the senses (the naturally salty seafood is spiked with ginger, chilli and soy), while a Caesar salad may well be the best of its kind we’ve tried yet, using Northumbrian Doddington cheese in place of anything Italian, and choosing delicately cured anchovies over the usual tinned fare.

Of our main course, triple-cooked chips are just as crunchy and fluffy as one would expect, and macaroni cheese is indulgently gooey — but we know it’s the steak you’re here for. We tucked into a both a rib-eye and a D-rump. The former is wonderfully succulent, boasting a deep outer char and vibrant pink, moist meat within. It arrives just on the rarer side of medium-rare, exactly as ordered. You probably won’t have heard of D-rump unless you’ve been to Hawksmoor before, but for us it's a show-stealer. It’s effectively a trimmed portion of rump, meaning you get just the most tender, lean part of the cut; it’s popular for grilling in Brazil and is ideal for those who like their steaks rare. Rich and slightly gamey tasting (think venison), it trounces fillet in the flavour stakes, is all but as soft and melt-in-the-mouth, and here it costs £20 for 350g as opposed to fillet’s £34 for 300g. We’re making it our regular.

Speaking of price, it’s worth noting that Hawksmoor is far from cheap. But why should it be? Indulgent food, generous portions, slick service and sexy surrounds make it ideal for a special occasion or an occasional treat, while you can rest assured the quality of meat is in no way being compromised. Hawksmoor is still using the same supplier they did when they started out eight years ago, The Ginger Pig, and even though the Yorkshire-based farms can no longer meet Hawksmoor’s increased demand alone, the company’s experts travel the country seeking out the very best meat available; a kind of beef consultancy if you will.

We’d be surprised if anyone has ever finished their final bite of steak at Hawksmoor and felt hungry, but take our word for it that the restaurant’s playful take on a Ferrero Rocher (complete with gold leaf) is worth saving space for. It ain’t small, either — take a look to the right.

There’s no risk of going dry: like other branches, Hawksmoor Knightsbridge does a good line in gutsy wines and clever cocktails. It also serves roasts of a Sunday (Hawksmoor is included in our selection of London’s best Sunday roasts, in fact), and on Mondays you’re able to bring your own wine for just £5 corkage.

Aside from a slightly dusty-tasting peppercorn sauce and butter a tad too cold to spread, we can’t find fault. Given Hawksmoor may just have proved that chain restaurants really can be brilliant, we reckon we'll let them off this time.

* Manchester, to be exact.