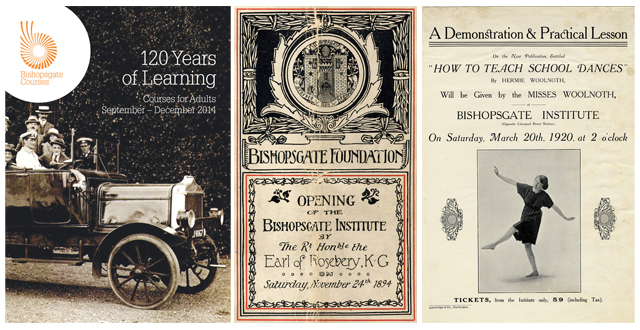 As Bishopsgate Institute prepares to celebrate its 120th anniversary, a new roster of courses will take a promenade back through time. The new programme for the upcoming Autumn term covers all kinds of disciplines and areas of interest, much of it with one foot squarely in the past and a focus on the stories of the people who lived in our city.

THE EAST END: More than any other part of London, the East End's history has been about metamorphosis. From the industrial docks to the arrival of immigrant workers to the mini-Manhattan it became under Margaret Thatcher, this course explores the whys and wherefores of the area. Thursday 18 September - Thursday 23 October (six sessions starting at 6.30pm). £74 to £99

VICTORIAN ART: Why did fine art flourish under Queen Victoria? This course looks at the dominance of the Royal Academy and the establishment of other great galleries. A trip to Tate Britain includes examinations of classics such as Ophelia by Millais, and Frith’s epic depiction of Paddington in The Railway Station. Thursday 6 November - Thursday 11 December  (six sessions starting at 2.30pm). £56 to £75

THE TUBE AS ART: Covering everything from roundels to maps and ghost stations, this look at the art of the Underground shows how our transport system has always been about much more than simply getting from A to Z. Saturday 27 September, 11.30am-4.30pm. £43 to £58

1911: Get grubby in the back-streets of the East End, by immersing yourself in the cuttings and ephemera of Bishopsgate Institute’s Library and Archive to re-live one year in the life of an area blessed with artful dodginess. Meet desperadoes, anarchists, gangsters and criminals aplenty. Saturday 29 November at 2pm, £14 to £19

BUILDING FOR EXPANSION: When the creaky old London parishes began struggling with a growing population and seemingly insurmountable social issues, private organisations and individuals stepped into the breach to help. This course charts the building boom from Bazalgette to Bishopsgate. Tuesday 16 September - Tuesday 21 October (six sessions starting 2.30pm). £74 to £99

BACK TO THE 1890s: This lunchtime course takes a look at the history of Bishopsgate Institute since its inception in 1894, using the building as a way of examining the social history of London and the local area. Tuesday 4 November - Tuesday 2 December (five sessions starting at 1.05pm). £33 to £43

WORLD WAR ONE: The Great War's centenary is an appropriate time to examine the effects of battles on the continent on people back in Blighty. Two courses cover the subject: one runs from 22 September 2014 - 20 October 2014 at 6.30pm, the other from Tuesday 23 September - Tuesday 21 October at 2pm. Both priced £50 to £67

ARTS COURSES: There are all sorts on offer from a close-up look at Hitchock's Vertigo to the art of printmaking and an introduction to Western architecture.

VISUAL LONDON: This course addresses London as it exists in visual form using the full gamut of photos, paintings, prints and maps to reflect the soul of the city. This one-day course runs on Saturday 11 October and the Saturday 25 October (10.30am-5.30pm). £61 to £82

LITERARY: You can try your hand at producing a graphic novel or get under the skin of Shakespeare with a look at his political and moral philosophy, or the A to Z of Romanticism.

DANCE YOUR PANTS OFF: If the brainy stuff all sounds too much, get spinning around with one of the dance courses — from Latin to the cha-cha-cha and rumba to tango and everything in between.

Visit Bishopsgate Institute online for the full range of courses on offer this Autumn.

Londonist is proud to be the 2014 Media Partner of Bishopsgate Institute.