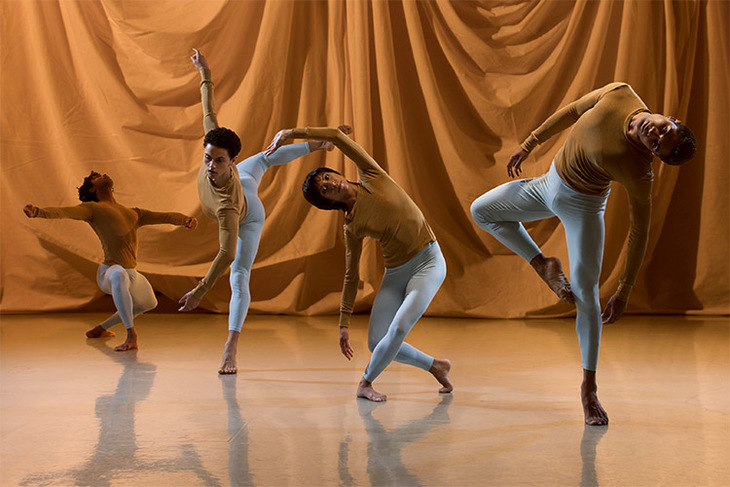 The spirit of 20th century dance pioneer Merce Cunningham, who died five years ago this July, hovers lovingly over this quadruple bill of flatbacked, tilting abstract works. There's the choreographer's own 1975 piece Sounddance, with its ochre drapes and soundtrack of electronic burbles; and there are clear nods to Cunningham's compositional style from both Lucinda Childs and Richard Alston.

Childs's Four Elements, commissioned by Rambert in 1990, opens the programme, Jennifer Bartlett's four huge paintings dominating the stage. A gong chimes slowly, and eight company dancers in decorated unitards glide past one another in stately lunges, as if sweeping through water. The lunges, flat-spread arms and perky little leaps that the men make in the Air section, flitting about the stage like leaves on the breeze, are pure Cunningham; the construction of the piece — building atmosphere from small repeated phrases —  owes more to American minimalist Tricia Brown. Abstractly postmodern, Four Elements demands a certain surrender from its audience, but if you can enter into the zone of the work there's a lot of pleasure to be had here.

Touring for the first time in 13 years is Rooster, Christopher Bruce's love letter to the mid-1960s. Soundtracked by the Rolling Stones and evoking Swinging London, the piece could not be more British in subject-matter and tone, yet it's Cuban-born Miguel Altanuga who most completely embodies the cocksure swagger and hormonal odour of Bruce's playfully absurd sexy-chicken dance. Antonette Dayrit is luscious as a swirling Ruby Tuesday, but this is really a piece for the male dancers to get their teeth (and pelves) into, with Altanuga in particular outjaggering Jagger himself every time he struts onstage.

After the three-minute solo explosion of intricate rhythms that is Alston's Dutiful Ducks,  Sounddance announces itself with a splutter of bubbling electronic noise bouncing around the auditorium from one surround-sound speaker to another. Those who know Cunningham's love of chance procedure will find plenty of serendipitous juxtapositions between sound and movement to smile at here: as the name suggests (and the choreographer would insist) Sounddance is a dance about sound, and a sound about dance, and exactly nothing else. Bodies spin and skim across the stage, revelling in the flurries of angular movement; Rambert's dancers have a welcome way of finding the fun in Cunningham, approaching it with a sense of reverent play.

Rambert Dance Company is at Sadler's Wells until 24 May. Tickets £8-£38. Book online at the Sadler's Wells website. Londonist saw this performance on a complimentary review ticket.