Things To Do In London Today: Wednesday 2 April 2014

If you’ve not already done so, you can subscribe to these daily listings and have them delivered to your inbox at 7am every morning. Alternatively, subscribe to Londonist Daily to hear about events further in the future. And help spread the word to your friends who haven’t discovered us yet!

NEW MUSICAL: Above The Stag Theatre inVauxhall launches a new musical, Orton, based on the lives of playwright Joe Orton and his lover and murderer Kenneth Halliwell. From £12, prebook, until 4 May

WINE TASTING: Head to Oxo2 on South Bank for an evening of wine tasting. Tipples on offer are all from the Vinho Verde region of Portugal, giving wine connoisseurs and newbies alike a chance to learn about the region. £10+BF, prebook, 5.30pm

FILM SCREENING: UK Jewish Film and JW3 present a screening of Fifth Heaven, a film about a teenager in British-controlled Palestine. £12/£6, prebook, 6.20pm

SOUTH POLE EXPEDITION: The Royal Geographical Society gives us a chance to hear about an expedition to the South Pole in November 2013, at An Evening In Antarctica. The lecture is followed by a Q&A session with the team involved. Funds raised go towards Walking With The Wounded. £35, prebook, 6.30pm

NEW FILMS: Whirlygig Cinema is a monthly opportunity for up-and-coming film makers to have their work shown. This month's theme is Art And Beyond, and takes place at Hackney Picturehouse. £5/£4, prebook, 7pm

FILM QUIZ: Bigger Boat Film Quiz comes to the Assembly House in Kentish Town. The multimedia quiz has quite a following from film buffs, but always welcomes new participants. Always popular, so get there early. £4, just turn up, 7.30pm

WAR BALLET: The English National Ballet begins a run at Barbican tonight. The performance, Lest We Forget, is inspired by the centenary of World War One. From £10, prebook, 7.30pm

Tickets go on sale today for Auction Against Hunger 2014, an evening of street food, entertainment and silent auction. The event takes place  on 22 May at Dalston Yard, but tickets are expected to sell fast. They cost £55, available here, with money raised going to Action Against Hunger, a humanitarian organisation aiming to end child hunger worldwide.

Yesterday's clue was BEADLE. Today's is ADAMS. What London connection do these two words have in common? Clue number three tomorrow. EDIT: We now have a winner. No need to email in your guess.

We know that many of you are as nerdy as we are over all things Tube, so why not spend your break today trying to identify the locations of these pictures, taken in the 1970s, and published in David Long’s book London Underground: Architecture, Design & History just last year.

Another view of London from far-out. You can just make out the City to the right. But where were we standing when we snapped the shot? 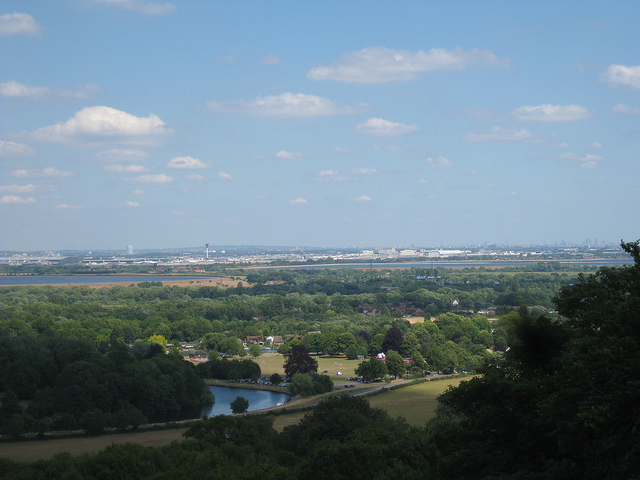 This Friday, we'll be picking one email subscriber at random to win a Londonist-themed goody bag. So if you're reading this on our website, sign up to our 7am newsletter before Friday for your chance to win. If you're already subscribed, let your friends know — particularly the ones who are likely to share the prize if they win.