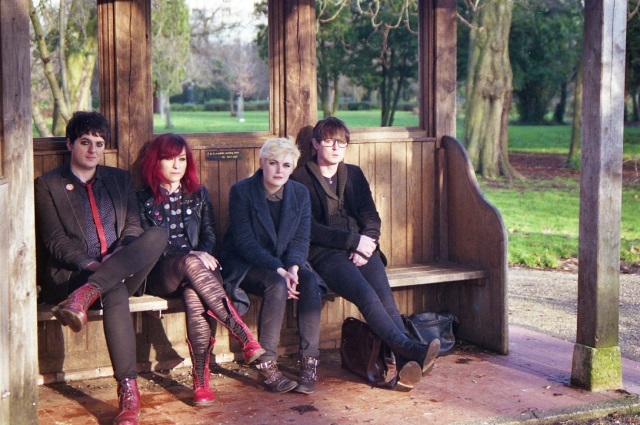 The latest in our New London Music series brings with it images of scribes furtively hiding in bushes or rabidly clamouring around politicians or celebrities for a snippet of gossip. Much like Londonist, as it happens. The band in question is the splendidly named Desperate Journalist, who may well be those very rock stars fending off frantic journos quite soon indeed.

Alumni of the Islington-based Fierce Panda label, Desperate Journalist are a four-piece indie outfit who play a jangly, updated version of Siouxsie & The Banshees-style rock. They pleasurably explore the darker side of the genre with plenty of The Cure (from whom the band get their name, via a circuitous route) and Sisters of Mercy thrown in, though thankfully minus the humdrum vocals. Ever looking for a unique reference point, Londonist will go with mid-nineties London troupers Hopper as the most likely absent parents of Desperate Journalist.

The band are from Finsbury Park, and hold their team meetings in the curry houses and pubs of N5, lamenting the tired state of the record industry. It's an industry that might be about to get a little more alert with the release of the quite excellent single 'Happening' on 5 May — a sharp 2 minutes 43 seconds of quality rock, and an excellent follow-up to last year's 'Organ'. Jo Bevan blasts through her lines with a great deal of verve, adroitly backed by the superb musicianship of Rob Hardy on guitar, Simon Drowner on bass and Caz Hellbent on drums. That's right, Caz Hellbent.

You can hear/watch the new track in full below.

The single will be out on the Giant Haystacks label, and their full album will follow later in the year when they'll return to Fierce Panda. And happily there are lives dates pencilled in — the single gets a launch show at the Black Heart in Camden on 8 May, they play Power Lunches in Dalston on 28 May, Tufnell Park's Aces & Eights on 6 June and then the Camden Crawl on 20 June.

We predict fine things from Desperate Journalist, and we're sure you'll agree. All we ask is that if they see Londonist lurking among a group of feverish hacks, they'll remember us with a quote or two on their way to fame.