Where To Learn The Drums In London 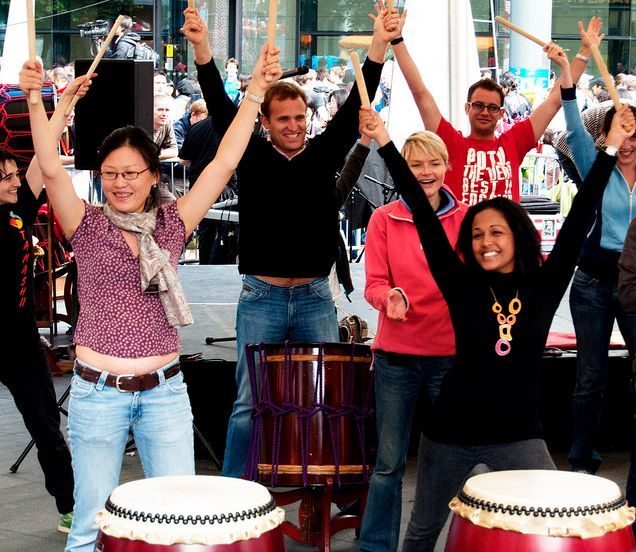 The key to any successful hit record is the lunatic flailing his or her arms about at the back. A proper beat is crucial to the music of just about any genre; here we explore the best places in London to learn the fine art of drumming, of all kinds of styles, so you can emulate the success of such drum legends as Keith Moon, John Bonham, Animal and, of course, Phil Collins. Fancy yourself as the next Tony McCarroll? Read on.

Planet Drum, Camden and elsewhere
Although they have yet to reach the entire planet, this drum school certainly has its eye on conquering the capital with premises in Hackney, Old Street, Willesden and its main base at the Scar Studios in Camden. Since 1996 they have offered one-to-one tuition, plus band and technique group workshops, for levels from beginner to expert. In the past they have hosted and sponsored drumming concerts and educational events for music venues including the South Bank Centre, the Roundhouse, Earl's Court, the Royal Albert Hall and Somerset House, and their continued bid for world domination continues with the imminent opening of a new Islington branch.

London African Drumming, Spitalfields
And you thought this would all be about pounding the pigskin in a dodgy pub rock band. Founded by three passionate and enthusiastic drumming students of drum master Mamadou Oury Diallo, the London African Drumming school is an open djembe drumming circle for all levels, just off Commercial Street. A djembe is a rope-tuned, skin-covered goblet drum, originating from west Africa, played with the instrument between one's knees while seated. Historically used to foster togetherness and community spirit, we can think of nowhere better for such an activity to take place than the East End, but if you're not up for a circle of djembe they even offer drumming lessons by Skype.

African drumming lessons are also offered by Drum Africa, based in Greenwich.

Elephant Drums, Elephant & Castle
Though presumably named after its locale, some drummers smashing about recklessly do bring to mind an elephant stumbling obliviously through a village leaving devastation in its wake. Release your own beast at this specialist drum teaching studio in south London, built up from two teachers in the back room of a music shop to a full herd offering drum courses and lessons, as well as organising community drumming events, band workshops and drum classes.

Paraiso School of Samba, Camden and Brixton
Traditional samba drumming is known as ‘bateria’. It’s a highly communal activity involving multiple drummers playing exotic instruments such as the caixa, the chocalho and the repinique. Each of the various instruments has a different role in a glorious clash of noises and the Paraiso School offers percussion workshops at Haverstock School in Camden most Tuesdays, and on Thursdays at the Brixton Recreation Centre. And for a taste of what you may be in for at each, here’s a spot of bateria in the unlikely surroundings of the Helsinki Samba Carnival.

Mill Hill Music Complex, Mill Hill
If lessons or group learning are not your thing, perhaps you're just looking for a set of drums you can go and whack at your own pace. Mill Hill Music Complex first opened to customers in 1979 and given they offer their drum studio for private practice at the spectacular price of just £3.50 per hour it's a miracle they can pay the bills. Their drum studio, Studio 05, houses a drum kit, a PA and iPod/MP3 playback, and enough space for a teacher too if you want to bring one. And their website specifies that they also offer 'quality hot drinks', so you really can't lose.

Taiko Meantime, Greenwich
Taiko is the style of Japanese drumming also known as kumi-daiko. Taiko Meantime was founded in Greenwich in 2001 to offer people the chance to learn traditional Japanese rhythms and techniques, bringing their art to the masses via performances at BBC Proms in the Park and the 2012 Olympics. Though their currently planned lessons are mostly just outside London (Bentley and Farnham in Surrey) they do offer London-based teaching on demand, so get in touch if you're keen to learn the complex art of the okedo, gagakki, shime-daiko and others.

Ealing Drum Studios, Brentford
Our west London recommendation, EDS is run by professional drummer Clive Jenner, who has played with the likes of The Proclaimers, Groove Armada, Roots Manuva and Tom McRae over a 15-year career. The studios contain a large selection of drums and equipment with bafflingly technical names such as Focusrite Interface 8 and Tascam Digital 24. Clive shares teaching with his colleague Dafydd Jones, who also has a solid CV of pop acts he's performed with including Duffy, Catatonia and Jools Holland.

Learnt the way of the drum anywhere you'd like to recommend to other Londonist readers? Let us know in the comments below.