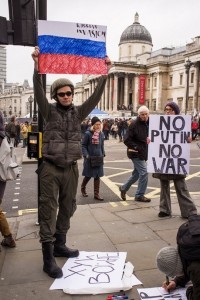 As the crisis over the Russian invasion of Ukraine's Crimea region deepens, more than 400 Ukrainians based in the UK gathered to protest outside the Russian embassy yesterday.

Russia's deployment of troops to the area — against the wishes of the new government — follows months of unrest, violent protests in Kiev and the removal of former president Yanukovych. The London protest remained peaceful but protesters demanded that Britain take action against Putin over the invasion.

British government ministers will boycott Russia’s Winter Paralympics in Sochi and have suspended their involvement in the G8 summit.

Photo by Kris Wood in the Londonist Flickr Pool.