London Calçotades: Where And How To Enjoy Catalan Spring Onions 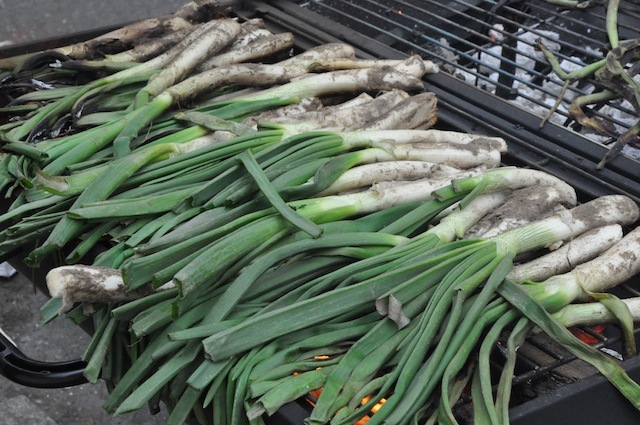 One of London’s ‘must-do’ gastronomic events right now involves getting smelly, messy – and eating a bunch of spring onions. Of course, these are not just any old onions: they’re the Catalan delicacy, calçots. Here we look at their cultural significance, how they’re eaten, and where to find them in the capital.

Looking like a cross between bushy spring onions and young leeks, these mild-flavoured allium are 15-25 cm long. A speciality vegetable given the coveted Protected Geographical Indication status, calçots (pronounced ‘kalsots’) are grown in Valls, a town in the Tarragona province in the south of Catalonia in north-east Spain.

Like asparagus and truffles, the annual harvest of calçots – January to April – is celebrated with hugely popular events known as calçotada (pronounced ‘kalsutada’ or ‘kalsotada’). These involve families and friends getting together to eat barbecued calçots, traditionally flame-roasted on vine shoots.

In Spain, calçotades take place at rural restaurants, in countryside farms, or in the gardens and rooftops of people’s homes. The onions are grilled until the outer layers are charred, wrapped in newspapers to keep them warm and steam-cook them further, and served on curved terracotta roof tiles.

Romesco, or its close cousin salvitxada, are an important accompaniment to calçots. These are sauces made from nuts (usually hazelnuts, almonds, pine nuts or walnuts), local nyora peppers or bitxo chillies (regular red peppers can be substituted), and olive oil. Depending on the recipe, tomatoes, onions, garlic and red wine vinegar are added, too; plus a little stale bread or toast to thicken.

In the dying embers of the barbecue, once the calçots have been cooked, breads and meats are also roasted. The latter typically include lamb steaks and botifarras: fresh local beef sausages flavoured with garlic and herbs. Fried potatoes and white beans are often served on the side. The meal is rounded off with oranges for dessert, washed down by plenty of red wine and cava. Music and entertainment jolly up the proceedings.

Explaining this old tradition, Jerusalen Gunning, an art curator from Navarra in north-east Spain, now settled in London, explains: “It’s a very simple thing: it comes from the people, who come from the fields. When they had nothing to eat, they ate what they grew – they just lit up a grill and cooked their plants and animals.”

She adds: "In Navarra, we similarly have ‘costillas al sarmiento’: tender young lamb ribs roasted on vine branches, as we’re near the wine region of Rioja. Spain is agricultural with very simple dishes so, just like the Catalan calçotadas, the country has preserved many regional traditions like these. It’s unusual to see them transported here to London though – but I suppose a calçotada is a fun way of eating with friends, equivalent to a Swiss fondue.” 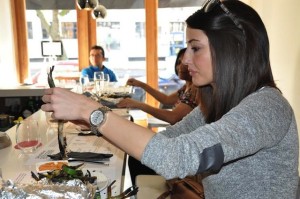 Indeed Rachel McCormack, a Catalan food expert credited with bringing calçotada to London in 2011, says: “I wanted to show that there’s more to Spanish food than tapas and paella”. She points out that it was in fact the food photographer Jason Lowe who first hosted calçotades in London – but they were private events for friends, and concedes she was the first to introduce them on a commercial scale.

Over the years she has held calçotades at several different venues. So well-received are her events that a number of delis and greengrocers have started selling calçots as a consequence; and several restaurants and bars now host calçotades or serve the onions as a tapa. She says: “Calçots are getting more popular: they sold double in 2013, for instance, compared with 2012. A lot of places are just grilling them and serving them with romesco sauce and a knife and fork, which is just sad, but the standard is gradually improving.”

To get a feel for what the ‘authentic’ calçotada should be like, we attended McCormack’s event last year at the superb Boqueria restaurant in Clapham. Walking down Acre Lane, a plume of pungent, aromatic smoke led us to a side street where she and a chef had lit up a wooden grill.

Inside the restaurant, a £30 menu generously included calçots with romesco, barbecued marinated lamb and chicken with allioli (Catalan garlic mayonnaise), morcilla and chorizo, a sumptuous yet light dessert of crema Catalana, and a glass of red wine or cava. (You can substitute meat with seafood or vegetarian tapas.) 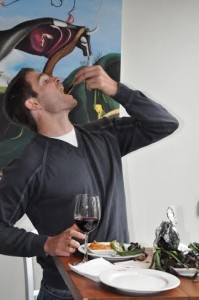 How to eat a calçot

There is an art to eating a calçot correctly. First, you have to hold it firmly from the top of the green leaves. Then peel off the charred outer leaves swiftly (or they may not come off easily), and dip the white part liberally into romesco. Finally, tip your head back, hold up the calcot to your mouth and eat, discarding the green leaves.

The onions have a sweet, vegetal flavour, made smoky and almost meaty by the flame grill. The texture is silky and can be a little bit stringy, so the leaves are not always easy to remove, and the insides can be a little tricky to chew.

And they're very messy to eat. Sauce will dribble down your chin, your hands will get stained, and your table will be covered in bits of charred onion skin. Equip yourself with plenty of tissues, by all means, but the enticing barbecue aroma will linger on your skin and clothes for hours. It’s the most fun you can have with your bibs on.

By the time McCormack has finished grilling onions outdoors for around 100 people – the largest calçotada she’s helmed – she is sunburnt and has red freckles all over her face and arms. She sits down to explain that although calçotades are gradually becoming popular in Spain outside Catalonia, many Spanish people have never experienced them – so to be able to do so in London is very special indeed.

She says that other than grilling, calçots can also be deep-fried, made into smoky marmalades, and added as topping for coca: a tomato-less Catalan pizza. Many London restaurants now serve them in innovative, non-traditional ways.

McCormack is doing more calçotades this year at Boqueria Acre Lane on 15th and 22nd February. Costing £30, the menu will include calçots with romesco, various barbecued meats, dessert and a glass of wine or cava. She’ll also host calçotades at Homerton’s Adam and Eve pub on 3rd and 11th March, with the same cost and menu. More dates will be announced throughout the season.

Caterer, cookery writer, food blogger and supperclub host Milli Taylor will have calçots with romesco on the menu of her £40 Spanish supperclub for Jamie Oliver’s Food Foundation on 19th February.

Exmouth Market’s Morito is also hosting calçotada parties, taking place on on 8th, 15th and 22nd February. A set menu for £25 will include charcoal-grilled calçots with romesco, grilled lamb chops with cumin and paprika, almond tart with a Spanish sloe berry-flavoured liqueur, and a cava and orange ice slush drink.

Brindisa’s Tramontana restaurant in Shoreditch has a special calçotada menu available every Saturday and Sunday lunchtime throughout February and March. For £35 you can enjoy calçots with romesco, served alongside a meat platter, side vegetables, bread, dessert and a glass of cava.

Also located in Exmouth Market, Moro is currently selling a single dish of charcoal-grilled calçots with romesco and salted anchovies; and Fitzrovia’s  too, is serving them as a tapa with romesco. The Camberwell Arms will have them on the menu from later this week until the end of the season. And it’s not only Spanish and Mediterranean restaurants. Modern British Lyle’s in Shoreditch has calçots on its daily-changing menu: you’ll find them unconventionally paired with ingredients such as cod and eggs or pheasant legs.

And if you fancy having a calçotada party yourself, these prized allium are available to buy from Brindisa’s Borough Market and Brixton shops plus online for £4/ bunch of ten. Natoora sells them for £3.99/ 125g bunch online, and for £20/ kilo in its Chiswick and Spa Terminus shops.  But hurry, the short season is around only for a few more weeks.