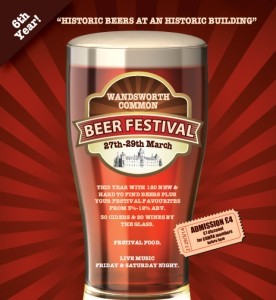 Compared with February's busy schedule of beery happenings, March is looking a bit quieter for beer festivals in London, yet it's not entirely an empty glass. As always, let us know in the comments if we’ve missed anything.

Some might argue that JD Wetherspoon's interpretation of the term ‘beer festival’ is somewhat misleading. The company often uses it to describe a brief focus on certain types of beer in its pubs, which otherwise continue to operate as normal. But if this doesn’t phase you, some fine-looking London-brewed beers may be consumed at the final leg of its ‘Battle of the Brewers’ London Ale Festival. A number of central London Wetherspoon pubs will be participating, but it’s the Crosse Keys in the City that seems to be making the most noise about it.

As the CAMRA organisers will tell you, this is the “longest running London beer festival in one place”. This possibly says as much about the nature of the King's Cross venue as about the event itself, but let's not be overly pedantic – it looks like a well-organised festival with a great range of beers. In fact, the published beer list is excellent and extensive, featuring brews from a considerable number of London's smaller brewers (including a couple of beers from Peter Haydon's wonderfully elusive 'A Head In a Hat' range) as well as many from further afield. Entrance is £3.50 (£2.50 for CAMRA members), with some exceptions – see the North London CAMRA website for full details.

Taking place in the grounds of the impressive 'Le Gothique' (AKA the Royal Victoria Patriotic Building), this biannual festival tends to combine fine beer and notable surroundings to great effect. Next month's event looks to continue this trend, promising 120 beers and 30 ciders, plus wine, food and live music. Tickets cost £4 (£3 for CAMRA members before 5pm) for the Thursday, Friday or Saturday, or there's a £25 all-inclusive preview evening on the Wednesday. See the 'Le Gothique' website for more details, or book tickets at Eventbrite.

The CAMRA-beloved Grain & Grain in Crystal Palace is keeping rather quiet about this – in fact, at the time of writing, its website makes no mention of it at all. But the advert in London Drinker magazine (PDF, see the bottom of page 48) seems to state pretty clearly that the Spring Beer Festival, featuring “at least 16 real ales and ciders” will take place over the last weekend of the month. Worth a look, if you happen to be in the area.

If you're a lover of beer or pubs, why not buy the Londonist book of London pub crawls for less than the price of a pint.