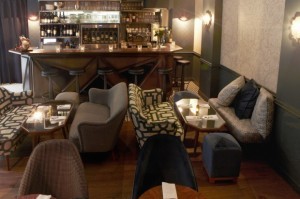 Given the unwieldy name of this new Covent Garden wine bar, it probably won’t surprise you to hear that there’s something French going down. In fact, this venue is brought to us by the across-the-channel-based Experimental Group, who as well as owning a bar by the same name in Paris also owns Chinatown’s hidden away drinks lair Experimental Cocktail Club, along with other similarly cool venues in Paris, New York and beyond.

The group’s second London outing swaps cocktails and spirits for wine, but many of the principles remain. The 500+  list highlights wines from small producers, lesser-known locations and those made in ways that buck the trend. Effectively, it’s the Experimental Wine Club. The supernatural part of the name (get us and our French) also references the group's fondness for more natural wine styles; though it isn't tying itself to any ‘organic’ or ‘biodynamic’ labels, it talks of picking the “cleanest wines from hand-laboured vineyards”.

Time Out Paris describes the original as a dive bar (albeit with fairly pricy plonk) but this London sibling has opted for suave and sophisticated over shabby chic; fabric wallpaper, large patterned sofas and light gained predominantly from candles gives the semi-intimate feel of a regal living room. Like the similarly-styled Experimental Cocktail Club, it manages to stop just short of the boudoir look.

An initial flick through the hefty wine list can be intimidating, with bottles that rise well into the thousands of pounds, and an irritating lack of any tasting notes. They are listed by region, with France taking around two-thirds and Italy and Spain grabbing the lion’s share of the rest. Prices start in the mid-twenties, but it’s only once you break past the thirty pound barrier that you begin to get spoilt for choice. A shorter list is available with regularly changing by-the-glass options offering around 10 each of red and white wines as well as some sparkling and rosé options — on our visit these started at £8 a glass.

We’re not convinced that there’s any good excuse for the lack of tasting notes on the list, but there are at least plenty of helpful and knowledgeable staff on hand to guide us. They’re not at all upsell-y either, but perhaps us Brits are naturally more intimidated at having to talk to an actual-real-wine-person than the Parisians are, as we still ended up Googling a few details in lieu of having them written in front of us.

Everything we tried, we loved — a rich, silky, deep-fruited £10 glass of 2007 Chinon being a wonderful highlight. We also fell for the concept of the Mystery Wine. For £9, the team will pour you a glass of a randomly selected wine (it could be any bottle on a list priced between £35 and £95) and if you guess the wine, you get a bottle of it for free. We tried and failed, but enjoyed the game all the same.

If your wallet allows you to stay for more than a glass, there are some decent platters and small plates on hand to line the stomach, from a truffle-laced toastie by the name of Posh Madame to cured meats and excellent cheese. And even if your wallet won’t permit more than one, it’s well worth dropping by for a sample. By wine bar standards this is a fairly pricey place, but it’s still an experience worth having if you’re into trying exciting wine — whether or not you know that much about it. You’ll learn a lot from the staff as well as getting something very good to drink, and you’d be amazed how much longer a glass of something intense and complex lasts you than a non-descript red down the pub. Well, it does us, anyway.