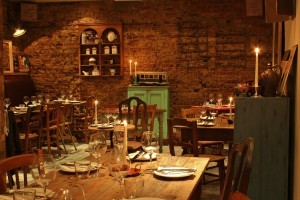 It may be run by three French brothers — Malik, Maxime and Yannis — and modelled on a traditional Parisian bistro, but at its heart Blanchette couldn’t be much more Soho.

It sits unassumingly on one of the area’s less-trodden streets, but radiates a warm glow through enticingly steamed-up windows. On entering, we feel almost like we’re walking into a family home, greeted with a smile and asked about our day — it’s a feeling that’s appropriate for a restaurant named after the mother of the siblings who run it.

Brother Yannis was general manager at Soho tapas bar Dehesa prior to setting-up Blanchette, and Salt Yard Group which runs that restaurant along with Salt Yard, Opera Tavern and recently-opened Ember Yard (also in Soho), is backer and consultant on this venture. Its influence could be recognised in the slick, cosmopolitan design of the space, which combines bare-brick walls and deliberately non-matching roughed-up wooden tables and chairs with all manner of homely nic-nacs to feel at once cosy, quaint and just a little bit hip. There’s no missing Salt Yard's influence on the menu of small plates designed for sharing, split between charcuterie, cheeses, snacks and bigger (but still small) meat, fish and veggie dishes; call it what you want, this is effectively French tapas.

We descend as a foursome on our visit, allowing the opportunity to try all the more dishes. From the snacks section, crispy pig ears are a scratching-like delight and a baked Camembert-style St Marcellin cheese is creamy, unctuous and gooey. They’re small portions, but big enough for everyone to get stuck in, and the respective prices of £3 and £4.50 are reasonable. Bread is served in a brown paper bag, as is increasingly becoming the cool thing to do, but it feels a little like a supermarket baguette (it lets down the excellent, creamy baratte butter it’s served with), while cheesy beignets are fully-loaded in terms of flavour but disappointingly soggy in texture.

There’s nothing disappointing about the selection of meats and cheeses, which, naturally, all come from France. An earthy-flavoured ham from the Pyrenees is a particular favourite; at £4 for a decent portion of about five slices along with some celeriac remoulade on the side, the good value continues. Praise is also due for the cheese list. A selection of unusual offerings includes tasting notes that help demystify a section of the menu that can sometimes feel intimidating. Our tangy Bleu des Causses is helpfully labelled as being a bit ‘like roquefort’.

Of the larger plates, a bolshy-tasting grilled beef onglet in a rich red wine sauce is a winner; it’s succulent, sexy and deep in flavour, the earthy richness lightened only by the refreshing tang of parsley-coated snails, which are scattered around it. Another dish of sea bass in brown butter with capers, lemon juice and baby gem lettuce is elegant, refined and quietly delicious for it. A creamy gratin of potato and Jerusalem artichokes richened with gooey, nutty Reblochon cheese also stands out, doing a good job of mopping up juices from the other dishes as well as being an indulgent if carby eat in its own right.

While a traditional dessert of apple tarte tatin wins points for not being overly sweet, a playful rice pudding that comes with add-them-yourself additions of ginger syrup and gingerbread crumbs steals the sweet-things crown.

An all-French wine list includes some interesting natural and biodynamic options, and plenty of good-value bottles that start under £20. With attentive and friendly service thrown in, we find Blanchette an easy place to fall in love with, envisaging return trips before we’ve even left, whether for a glass of wine and some light bites, or a slap-up meal that feels like more of a treat than it is in terms of price.

Our only slight hesitation lies not in the food itself, but the selection of it. Generally rich French food doesn’t lend itself as naturally to the tapas-style approach as that of Spain or Italy, and when you interchange mouthfuls of a bold meaty number such as our beef with something delicate like the sea bass, you risk losing the effect of both. This won’t stop us returning, but we will bear it in mind next time we order.