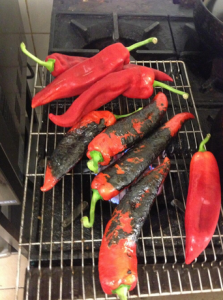 If you’re not overly familiar with Peckham, this restaurant could be tricky to find. Our take on this is to suggest you put your smartphone away and shut your eyes as you leave Peckham Rye station, leaving your nose to do the rest of the work. In no more than 10 minutes’ time, you’ll be outside a rather grand but scruffy looking building (which was formerly the Frog on the Green deli, and before that a pub) inhaling the meaty, smoky scents which billow from behind a makeshift awning on its forecourt. At least we hope you will be.

That makeshift awning is as close as Peckham Bazaar gets to a kitchen wall, and the grills within it are where the magic happens. They are the domain of Albanian chef John Gionleka, his tools for churning out charcoal-blistered food that he describes as pan-Balkan. If you don’t know what that is, it’s largely similar to Greek, but with a few more Ottoman influences that you might recognise from Turkish cuisine: think dips, meze, grilled kebabs and bold spicing.

Inside could be considered stark if it wasn’t so full, with white walls, plain closely-packed tables and little in between. Instead it feels all the more convivial, rocking a look we’re going to call supperclub chic – it’s all about the food, as opposed to the setting.

The service largely matches the supperclub description, too. It’s friendlier than it is efficient with hefty delays between ordering and eating, but thanks largely to the chef’s business partner (wine expert and prolific tweeter Donald Edwards) who makes light work of front-of-house, we feel so warmly received that it would be hard to bother.

The menu is loosely split into starters and mains, though a strong sharing vibe means there’s no need to worry about that too much. From the smaller plates section, chicken winglets are smoky-flavoured, heavy on moist meat and not as small as their diminutive name suggests. Marinated anchovies come as a generous feature of an orange and fennel salad, accompanied by a creamy taramasalata which is bright in flavour but – unlike many a version we’ve come across – not ludicrously, artificially Barbie pink in colour. So far, so good.

It’s not just because we’re hungry by the time they arrive that the large plates go down even better. A lamb and pistachio adana (that’s a kebab in the style of those originally made in the Turkish city of Adana) is succulent, juicy and deeply spiced with red pepper, enlivened further by a ruby-red capsicum dip that goes by the name of ajika. A vegetarian fricassee of butter beans, Jerusalem artichokes and oyster mushrooms is a surprise hit; its earthy, silky flavours are addictive and sexy. On learning afterwards that said mushrooms were picked wild from within the SE15 area, we wonder if there was something extra special about them. Oh well.

The best thing about the food at Peckham Bazaar is that it’s simple, straight-up comfort food sort of stuff, like a cross between your favourite kebab shops and those all too short-lived weeks of summertime barbecues. There’s a lot more to it than that suggests (complex spicing, marinating, careful cooking) but we don’t need to know about that, we just need to enjoy it.

Starters hover around the £6-£7 mark and mains £10-£15, prices we’d consider low given the high quality and hefty portions – though it will be far from the cheapest in the area. The wine list is no afterthought, either: bottles come almost entirely from the Balkan area, with more than 12 Greek options that range from under £20 up to £60 and offer some unusual numbers for those who are interested.

All in all, lucky old Peckham.