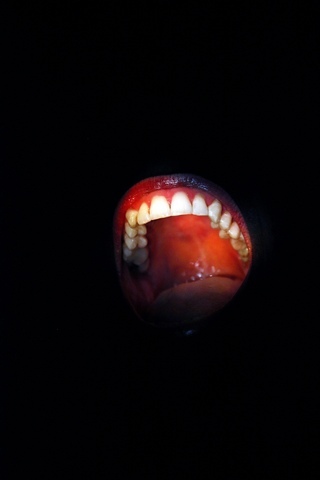 Inside a packed Royal Court Theatre an unusual thing happens: the theatre goes dark, really dark. The lights are not lowered but switched off entirely. Suddenly the darkness becomes a heavy, physical presence. There is no reassuring glow from the aisle lights and, amazingly, no green ‘Fire Exit’ signs. All the distractions every theatregoer automatically tunes out are gone. Immediately, the experience of being in a theatre is transformed, and the audience knows something out of the ordinary is about to happen.

The darkness is the central innovation in the legendary Walter Asmus’ production of three Samuel Beckett short monologues, Not I, Footfalls and Rockaby, but by no means the only piece of inspiration. All three plays are performed by Lisa Dwan, who begins in Not I as a disembodied mouth in the dark, but by the end has acquired hauntingly dim lighting, as though a weak moon has come out somewhere backstage.

Dwan has performed Not I to acclaim over several years. Her interpretation of the short piece, famously declaimed by a mouth and nothing else, performs radical surgery on Beckett, speeding up the lines until they become a cascade of words, waves of sound and rhythm as much as meaning. The second, nameless male character, whose role is simply to raise and lower his arms three times, has been cut altogether. The mouth is far away but manically alive, possibly possessed. The result is like tuning into a transmission broadcast from a distant star, and finding yourself unable to stop listening, captivated by a brutal, disturbed story.

Watching Lisa Dwan in the halflight is like seeing a ghost. Footfalls features her pacing a stretch of carpet, spectrally illuminated and barely visible. She talks to her dying mother, off-stage, and they repeat rituals that have no end: “Will you never have done – revolving it all?” Her character, whose name shifts from May to Amy, is heartbreakingly vulnerable but both determined and doomed to walk and to keep on walking. In Rockaby, Dwan has aged and her character, W for ‘Woman’, rocks in a chair as she holds a looping conversation with a recording of her voice. The loops become shorter, and the repeating phrases – “In the end / close of a long day” – run down and spool out. The ending of a life, right there on stage, is no formal theatrical experiment but a deeply moving account that strips away everything except the shared experience of a terrible finality.

The Royal Court’s staging of this trilogy, 35 years after the individual plays were first performed, proves that Beckett retains all of his originality, dramatic mastery and power to shock. Despite his influence there is still nothing on stage remotely like his writing, and the power of Lisa Dwan’s performances and of Walter Asmus’ terrifyingly precise production spark Beckett's neglected works into life. Remarkably enough this production, three difficult, uncompromising monologues played in the dark and finished in an hour, is transferring to the West End. London might be spoiled for good drama at the moment, but this is the one not to miss.

Not I, Footfalls and Rockaby are sold out at the Royal Court Theatre, where they run until 18 January. The plays transfer to the Duchess Theatre, 3-5 Catherine Street, London WC2B 5LA from 3-15 February, where they will play with start times of 8pm and 3pm for Thursday and Saturday matinees. Tickets £25, £20 and £12. To book call 020 7565 5000 or visit the Royal Court Theatre website. Production image by John Haynes. Londonist saw the production on a complimentary ticket.