Bakerloo And Northern Lines Not Stopping At Embankment 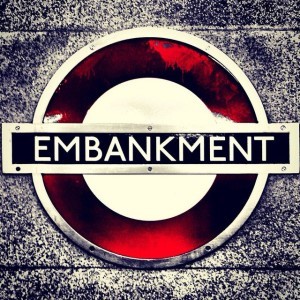 Transport for London is replacing the escalators to the deep tube lines (hence why it's only partially closed). Your best bet is to get off at Charing Cross and walk. And it's not far, because Charing Cross-Embankment is the second shortest journey on the Underground network at 260m-ish (Diamond Geezer went into all this back in 2007; the shortest journey, Leicester Square-Covent Garden, is also officially 260m but TfL insists that's the shortest).

At street level, Google Maps puts the walking distance between Covent Garden and Leicester Square stations and Embankment and Charing Cross stations at 200m each. But this is without factoring in the lesser-known side entrance/exit to Charing Cross that leads to Villiers Street. Instead of leaving via the front of the station onto Strand, look to the left of the ticket barriers by platform 1. You'll see some stairs leading down – a handy shortcut, 70m less.