Every day until Christmas we will be pointing you in the direction of a London-inspired Christmas gift that (with a bit of luck) you won’t already have on your list. Climb up onto our collective lap and we’ll see what we can move from our sack to your stockings… 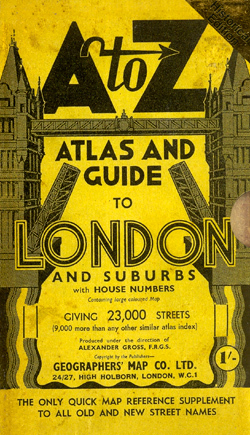 Like exploring London? How about doing it with a vintage street map to get an idea of how things have changed since before the Second World War?

Also included are a tube map, guide to places of interest and specialist maps of theatres, cinemas, clubs and shopping centres. A foldout coloured pictorial map of central London is tucked inside the back cover.

And to top it all, the atlas is supplied in "a stout protective slipcase". Super.

The A to Z Atlas and Guide to London and Suburbs 1938/9 costs £9.95 and is available from AZ.com, Imperial War Museums and Stanfords.