We stand on the pavement looking into the strip-lit office block, searching for signs of late night workers tapping at keyboards. The building appears empty but even so, it cannot blink in the face of the dark, it is so wired with electricity.

"I call it supermarket style lighting," says Garry, looking up at the building. "The kind that makes the night time look like day time. The not very nice kind."

British Gas lamplighters Garry Usher, John Blanchard and Iain Bell are leading me along the streets of central London, on a mission to show that while the 'supermarket' incandescence of this office block is prevalent in our city, there’s a more romantic experience of the night to be had.

So we are heading away to the south side of Pall Mall, to where we can find what Garry would consider to be "a mellow yellow" kind of a light – and Carlton House, the former town residence of the Prince Regent, is our first stop.

Garry rests a ladder against the wall near the building to reach a squat Victorian street lamp. As his colleagues and myself look on, he flips open the rectangular glass door of the case, wipes away the soot on its insides, then opens the valve at its heart.

Four gas mantles blossom into a nest of flames. Light and shadow spill out, fanning onto the ground around us. Together, they describe the edges of
the steps, and rest side-by-side in the grooves of the colonnades.

This intimate gas-fired illumination of the dark is not unique. It happens every night, all over the city. Across stately avenues, the curved pathways of the parks, and the outside of tidy Georgian townhouses. As far north as Highbury, as far east as Bromley-by-Bow, and as far west as Richmond Bridge. Most are 150 years old, some even older than that.

There are around 1,500 of these traditional gas street lamps – pieces of heritage that hold a torch to the time before over-achieving electric lights began to saturate our night-times.

British Gas looks after 1,300 of these traditional lamps for London’s borough councils. And so analogue are the mechanics of the lamps that they still rely on people like Garry and John to operate them. 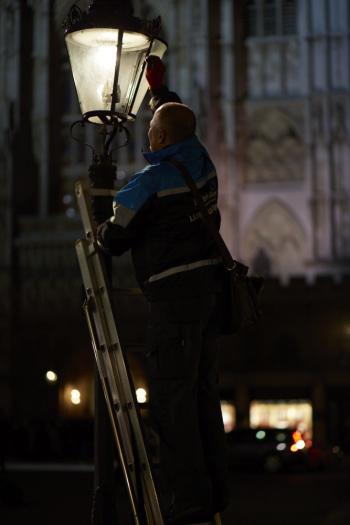 The most traditional streetlights are identifiable by the clocks in their glass cases. These are manually wound up every 10 days and when the clocks change, each one has to be physically altered by hand.

Garry, John and their boss Iain are part of a small team that look after the lamps. In the depths of night, each one is visited in continual rotation,
being paid a visit once every fortnight. "As soon as you put the ladder up, people want to know what you're doing," says Iain, in his thick Scottish accent.

"The lamps fascinate tourists and Londoners, many of whom have worked on the same street for years having no idea these lights were outside their offices."

Arriving on scooters, the lamplighters tend to each street light. Duties that involve resetting the clockwork, cleaning the cases and fixing them when they fail – often as the result of a collision with an articulated lorry.

The lamplighters enjoy sprucing up the lights for important occasions too, such as when a state delegation sweeps into town; for Her Royal Highness, there's nothing better than a traditional illumination of the city's night sky to impress her guests.

"Normally the Queen just has four burning in the Buckingham Palace quadrangle. But we've got the North Korean dignitaries here this week," says Garry, who's been in this job – which he "absolutely loves" – for 20 years.

"We were instructed to light all 16 of them. Imagine how impressive it will be for the visitors when they pull up and see the lights," he says, animated.

Luckily for Londoners, you don't have to be within the gates of the royal residence to see the lamps in their full glory.

The trio take me to the snake-shaped pathways of St James's Park, where the night theatre is just as regal. On both sides, gas lamps gently exude a creamy orange glow, touching the trees and borders with a whisper – using only the power of 40-watt household bulb.

In the company of these lamps, the spirit of the dark rises, shifting the mind to a new mood. It is a calmer mood, one often shadowed by the everywhere-orange smog of light pollution. As Garry conjures the flames of one into being, we all bask in its glow, as if hanging out by a bonfire.

As we wander from one lamp to the next, I discover the guys are stocked full of brilliant facts about London. Such as the one about the long-gone street light in Leicester Square where, in exchange for a shilling, people could draw off a cup of hot water for their travels.

Or there's the story that each old parish of the city had unique markings carved into their lamp columns, which functioned as postcodes.

This served the crucial task of letting you know if you'd found your way back from the pub, or not. As we reach Smith Square near Parliament, John and Iain show me an example, a grid etched at the base of a post. I feel its deep grooves – unmistakable once you notice them.

A black cab purrs past, its orange 'taxi' light alert on the top of the windscreen. John takes us back to the old ways of the city's night: "Just imagine in the smog, when there was no electricity around, nothing would be lit.

"Londoners back then would have felt these crests in the dark and know that they were home."