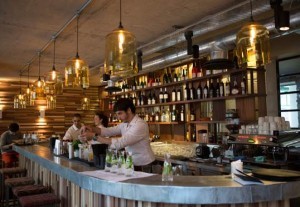 Chocoholics had reason to rejoice when this entirely chocolate-themed restaurant opened its doors in Borough Market around a month ago, but that’s not to say it’s all brownies, fondants and truffles.

The first-of-its-kind in London, the restaurant is brought to us by nationwide chocolate shop group Hotel Chocolat, and is named after their own Rabot Estate cocoa plantation on Saint Lucia (and the year it was founded). It takes direct inspiration from the group’s only other restaurant venture, Boucan, which sits on the estate itself and puts cacao at the heart of all its dishes.

An open cafe, bar and shop area on the restaurant’s ground floor feels like an extension of the market, while upstairs feels more like a ‘proper’ restaurant. Wood panelling and some carefully placed foliage makes the space look like a set designed for a production called Plantation, though the recorded sound of ribetting frogs in the toilets is more CBBC than West End.

The food is surprisingly grown-up, considering. We begin with a brief tasting of some toasted cocoa beans which we find already at our table on arrival: they are nutty and crisp, with a taste more recognisable as coffee than chocolate. Our waiter explains some basics about how they’re grown, the flavours in them, and the different ways they can be used, before we’re left to taste our way through cacao in all its forms.

A sea bream tartare made with cacao pulp is refreshing and bright flavoured, the cacao giving a citrus flavour, as well as a silken, juicy texture. The dish isn’t unlike a ceviche. A robust pork terrine is paired with roasted cacao nibs instead, lending a savoury edge and peppery notes. Should we have wanted to add more, we could as salt and pepper are joined in the centre of the table by a cacao mill.

A main of roast rabbit wrapped in bacon is old-school cooked with cocoa butter, which gives a creamy, almost fudge-like taste. A dish of cacao marinated rib-eye is tender and full-flavoured, though the cacao isn’t discernable in itself. There’s no let-up, though: an accompanying red wine jus gains depth from the addition of cacao nibs, and mash blended with white chocolate and horseradish is creamy, rich and only very slightly sweet.

The dishes are notable for being well seasoned and executed in style, though whether or not the added cacao is in any part responsible for this we couldn’t say. There’s no question when it comes to desserts, though. A selection of mousses made from chocolates of different origin and darkness is as insightful as it is indulgent, while a platter described on the menu as ‘chocolate genesis’ takes us through cacao in all its forms, from nibs to creams, and from dark chocolate to white; all that’s missing is a Mars bar. But, hey, we can forgo that given there’s a whole menu of Saint Lucian rum cocktails to pair, all with some added chocolate, naturally.

What Rabot 1745 offers is not just an interesting and informative homage to chocolate in all its guises, but a restaurant experience that stands up in its own right. Yes, it’s a novelty and yes, it’s very good PR for Hotel Chocolat, but this is a welcome addition to Borough’s food scene that we hope will stay around.