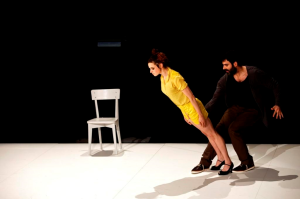 A bit like dance, a bit like theatre, the art of the mime isn't necessarily something you'd regard as 'contemporary'. Yet the London Mime Festival has, since 1977, been bringing the form into the modern world. This January, like every year, artists and companies from all across the world converge on London and, this being mime, you don't even need to worry about a language barrier.

The festival programme promises acts on a 'something for everyone' basis from Città di Ebla’s adaptation of James Joyce's The Dead to a full-mask comic show from Britain's very own Vamos to Cru's experimental French/Spanish production Fet a Ma (pictured) to Mat Ricardo, the 'Derren Brown of juggling', which honestly just sounds awesome to us. As well as the staggering number of shows, the festival, as usual, includes workshops and artists' talks.

Apart from offering something different from the ocean of theatre and comedy, the Mime Festival should be something new for those of us who previously thought miming was just 'people pretending to do stuff'.

We mean, yes, okay, that's probably still true, but then Picasso was just a guy with a set of paints.

The 2014 London International Mime Festival takes place in various venues across the city from 8 January to 1 February. For the full programme, check out mimelondon.com through which tickets can also be booked.