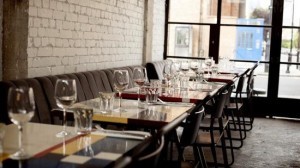 Named after its position on Hoxton Street, this venue had no chance of being anything but hip when it opened up a couple of months ago. The owners really went with it, too. Bare brick walls, exposed concrete floors and sanded-back wooden beams are as East London as they come.

On a cold weekday night, the venue is buzzing with chit-chat and the sexy, the cool and the bobble-hatted are all in attendance. From its glass frontage, the restaurant radiates like a ray of sunshine over Hoxton Street, which seems wholly appropriate given it has an antipodean chef, at least one waiter from that part of the world, and a menu that leans in the same direction.

Plates are made for sharing with a couple of large options and several smaller ones, split between — ever so slightly irksome — ‘land’, ‘garden’, ‘ocean’ and ‘bits’ headings. In true small plate-style, the dishes arrive as they’re ready, making for an all the more informal tuck-in.

We choose a large plate of surf & turf to share and flank it with small plates and sides to create a feast for three. At £24, it’s not cheap but it is impressive value for a platter of sliced rib-eye steak, char-grilled scallops and the kind of other-side-of-the-world prawns that you throw on the barbie rather than shove ashamedly in a sarnie with mayo.

The steak drips with flavour and oozes juice (it’s served spot-on the precise  “medium-rare but a bit more rare” that we order); the scallops are soft and creamy; and the prawns sweet, succulent and full of crustacea flavour. In a humble, light-hearted setting we are knocked back by the precise cooking the plate displays.

Other dishes struggle to reach the heights of the platter, but don’t do at all badly. A plate of pan-fried duck breast is in itself enjoyable, tender and well seasoned, but its pairing of courgette kimchi, which packs a real punch is the highlight. Another of braised octopus with celeriac puree and pumpkin seeds sees those roles reversed: the octopus is wonderfully cooked, becoming delicate and melt-in-the-mouth as opposed to chewy, but the accompaniments are downright dull.

A surprise hit is a butternut squash, quinoa, feta and avocado salad. It sounds a bit too much like health food on first glance, but is brought to vibrant life by the addition of tangy sumac and toasted coriander seeds, the latter adding bursts of bright, citrus flavour along with a pleasant crunch.

A dessert of spiced plum clafoutis comes as four mini-puddings; gooey from being drizzled with agave syrup and rich from the addition of amaretto. Like the food that came before them, they are well-executed but homely at heart; indulgent enough to be a treat, but still reasonably healthy seeming; and full of bold, bright, sunny flavours. Dessert is £6 and all our small plates come in between that price and a tenner.

It’s cool and it’s hip alright, but 100 Hoxton is the opposite of what many a venue of that description can be: it’s simple, laid-back and has way more substance than you’d think. Rumour has it that it’s sunny all year round, too.