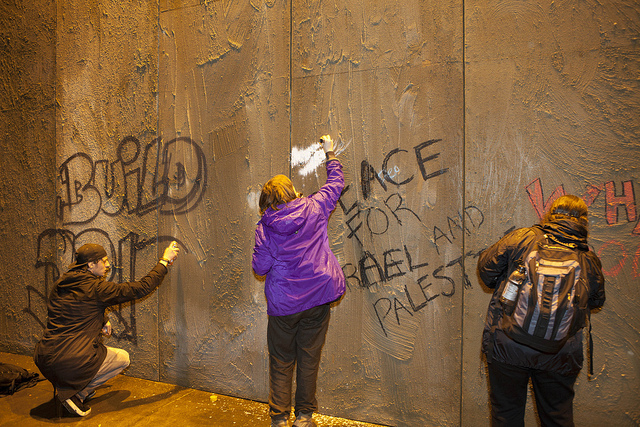 If you find yourself anywhere near Piccadilly in the next week, stop by St James's Church and look through the gate. In place of the usual market in the courtyard there's an 8 metre high concrete wall, a replica of the Separation Wall surrounding Bethlehem today.

The installation of the wall is part of Bethlehem Unwrapped, a "festival of hope" and celebration of the real "little town of Bethlehem". It's free to visit the wall and you are encouraged to leave a message on it, whether that's a poem, a reflection, an image or prayer from any faith. We were there on Christmas Day and found it incredibly moving.

Inside the church a programme of cultural activities takes place, including a slam poetry night on Sunday, a comedy night headlined by Mark Steel and Jeremy Hardy called Stand up Against the Wall on Monday, plus a screening of the film Jeremy Hardy vs the Israeli Army on 2 January,. Partake of Bethlehem Feast on 3 January or a panel discussion on 4 January. It all comes to a close on Sunday 5 January with The Bridge, a concert featuring Nigel Kennedy and renowned Palestinian singer, Reem Kelani and more. Find full listings and book tickets here.