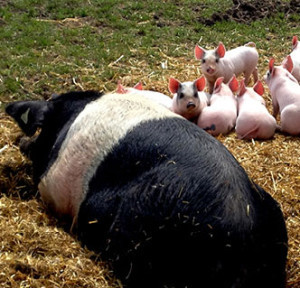 If you’re near Trafalgar Square this Thursday (21 November) between 12 and 4pm, then you can pop by for a free lunch, as Wahaca chef Thomasina Miers and a host of participating restaurants hand out 5,000 free portions of their favourite pork-based dishes.

It’s about more than a bit of a fun, a cool pun and that spare three quid you didn’t have to spend on a meal deal, though. The Pig Idea, a campaign started by Thomasina Miers and food waste expert Tristram Stuart is about changing UK and EU law to mean that food waste from restaurants, schools, shops and canteens can be fed to pigs, as it previously was for hundreds upon hundreds of years until 2001. You’ll probably remember ‘pig bins’ where this waste was collected.

It was foot and mouth which originally triggered the ban in the UK in 2001, due to – still completely unfounded – concerns that the outbreak started on a farm where pigs had been illegally fed unprocessed restaurant waste. In 2003, the ban was rolled out to the whole of the EU.

There are many strands to The Pig Idea’s argument for why the ban should be overturned. The most basic is that feeding waste to pigs is one of the most efficient, resourceful and environmentally friendly ways of creating more food in the form of pork; it is the reason people first started to keep domestic pigs. Then there is the argument that this diverse waste is actually more nutritious and enjoyable for the pigs themselves than mass-produced soya-based feed, which usually also needs to be shipped in from abroad increasing that all-important carbon footprint. And the economic argument which cites the lower feed costs for farmers and reduced waste disposal costs for restaurants that the lifting of this ban would result in, as well the potential for creating jobs in the so-called ‘eco-feed’ sector.

Probably the most compelling argument has its focus much further afield, though. The ban means that European farmers are importing millions more tonnes of soya from South America each year, and that as a result they are directly contributing to a growing demand for the deforestation of rainforests in order to meet demand. Simultaneously, they are putting a strain on global food supplies and making soya more expensive for the developing world; as Thomasina Miers sums up, “essentially our pigs in Europe are competing with people for food”.

For every argument there is a counter (not least the terrifying fear of another foot and mouth outbreak), but The Pig Idea is convincing all the same. Take a look at the website for all the facts and if it gets you interested, then do a little Googling to find out more. This article has a lot of detail. Or you could just head to Trafalgar Square on Thursday where big name supporters such as Hugh Fearnley-Whittingstall and Valentine Warner will be on stage to explain why they’re backing the campaign. Grab your free pork dish from Bistrot Bruno Loubet, The Delaunay, Cabana or one of the other pop-up restaurants in the square while you’re there. The pork in each of the dishes will be from one of eight specially-reared pigs, fed entirely on leftovers.

So, where do you stand? Is it a crack(lin)g idea or a load of swill, let us know in the comments below. No piggy-in-the-middles, please...