The Best Gigs To See In London This Week

US band who are over here on a massive UK tour. You can see them at the cosy Waiting Rooms or the massive Shepherd's Bush Empire at the end of the month. I know which I'd prefer — but that's just me. Tickets at Waiting Rooms are only £6.

The Riptide Movement, The Garage, Highbury and Islington

Rock band from Dublin who are really making waves at the moment. They are just back from the US having played gigs in LA and New York. They've made a couple of TV appearances in Ireland, and this summer supported the Rolling Stones at Hyde Park. Gig details here.

Our ‘Shameless Favourite’ this week. These guys formed last year, and this track is from their new EP, which came out in September called ‘String Up The Entertainer’. Gig details here.

Tom Hyatt is a London-based singer/songwriter originally from Lancashire. Combining a belief in timeless, well-written songs with a strong DIY ethic, he independently writes, records and performs from his home in Islington. Gig details here.

This track is from the EP of the same name, which came out last month. On a UK tour throughout November. These guys are pretty big, but the ticket price at Dingwalls is only a tenner. Gig details here.

This is the first single from a six-track EP called 'For My Mother'. Burdon has been compared Alison Krauss, but you could mention Dolly Parton, too. Either way, if you like country you'll like this. This track will be released as a single, and the video is currently filming. Gig details here.

We Used to Make things, Union Chapel, Highbury and Islington

FREE GIG! One of my favourite London bands. A joy-filled mixture of carnival and riot, they are brilliant live. We Used To Make Things sing songs are about love, despair and escaping middle management. Gig details here.

This track is from the band's debut album, Deep Fried. This gig includes burlesque dancers and something called 'Pirate Fire Whip Action'. There's a free shot of Bourbon for the first 50 through the door — you might need it. Gig details here. 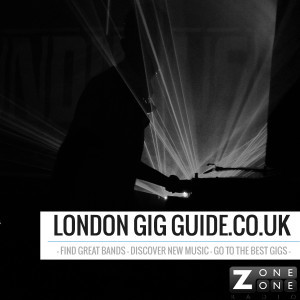 For next weeks gig recommendations and to hear LondonGigGuide's weekly radio show, visit the web site.