The Bells Of London Are Time Machines 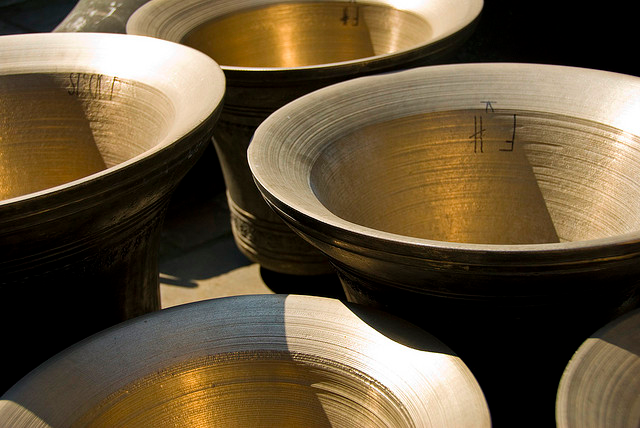 The sound of a bell collapses the historic distance between the person who hears it and the intentions of the people who had it cast. A bell ringing is a message transmitting and Londoners are continually receiving communication from their ancestors by way of pealing, knelling, ringing, triiiiinging, telling, calling, tolling and more. The bells of London are time machines.

Born Within The Sound 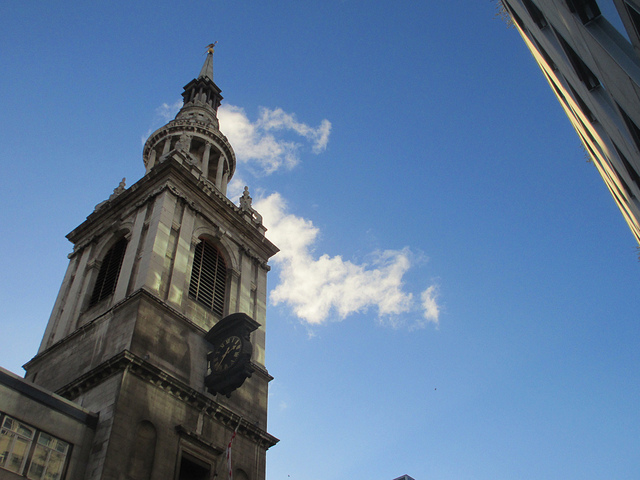 Bells can be found everywhere. As the tallest structures on the city skyline for such a time, church towers allowed an unobstructed delivery of sound that performed functions beyond the call to worship. After the city gates closed, for example, the bell at St Martins-Le-Grand provided the first in a chain of curfew calls during the reign of Edward I. The peal from this collegiate church was then taken up by those at the edge of its resonant reach.

Such is the power of a bell that all those within hearing distance would live and work to its metre and, in kind, have their identity defined by it. The most famous instance is the legacy of the Bow Bells; those born within its range are true Cockneys. Today, taller buildings dampen the sound, while noise pollution from traffic has further reduced the area of earshot around St Mary-le-Bow. Under the right conditions, the bells can perhaps be heard over a few square miles. After the Times Atlas of London conducted a sound survey of the area and revealed that no maternity ward exists in this radius, an MP3 soundtrack of the chimes was made available. The Reverend George Bush backed this "digital initiative" in the hopes of creating a new generation of "global Cockneys".

One of the most important bells in London (and the country) that unites a community is named, inversely, the Division Bell — the alert that calls Members of Parliament to a vote. Even more contrarily, it is no longer a bell in the traditional form. In many restaurants, pubs, local residencies and some municipal buildings around the Houses of Parliament – even in the smart phones of the MPs and their aides – an electric bell system is installed. When the House is ready to vote on an issue, the bell is rung (or the alarm network caterwauls) for eight minutes to give those MPs wishing to vote time to get into the House. At the Speaker's direction, those MPs pass through into either the 'Aye' lobby, or the 'No' lobby and their bodies are counted as votes. Accounts of politicians scurrying through corridors, their dinners upset on their fronts, are a bonus image in the grand effects of a bell on the individual.

I Do Not Know 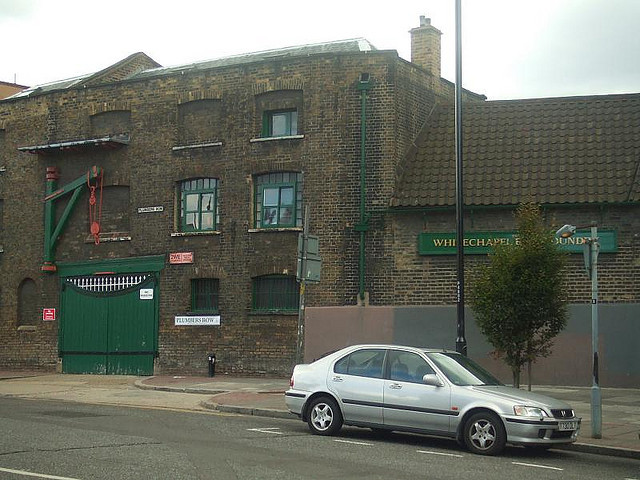 The talking bells of that omnipresent nursery rhyme, Oranges & Lemons, are a useful register of the capital's bell celebrity, many of which are still a-ringing. Some were cast in the Whitechapel ("two sticks and an apple") Bell Foundry including the titular St Clement's, St Martin's ("I owe you five farthings") and St Mary-le-Bow ("I do not know"). Established in 1570, the foundry is the oldest manufacturing company in Britain and has, since the last Elizabethan era, cast some pretty important bells, including the Liberty Bell and Big Ben.

Like all good time-machines, bells can crush not just time but space. A train departing a station in Indonesia, for example, will make its exit to the Westminster Quarters. Those tones, made famous by the peal outside the Houses of Parliament, can mentally transport the attuned listener to the source of the sound as a taste might return us to a moment of some significant experience. Pluck from that ding-donging the note B and that is Big Ben – a tenor and London's most recognisable of ringers. It took sixteen "beribboned" ponies to pull the bell to its new home in 1859 and on 31 May that year, the procession cut a wake of excitement through thousands of witnesses, crossing London and then Westminster Bridge. Meanwhile, in 2012, the flotilla that made seemingly endless progress under these bridges to mark the Queen's Diamond Jubilee was led by a boat laden with bells, many specially cast in Whitechapel.

The Bells of Dickens

The emotive response to bells (the one that can transport us) is one that has been captured countless ways by those writers who are so eminent that we attribute them each their own London. Shakespeare's London, Pepys' London, Dickens' London, etc. In the latter's Little Dorrit, Mr Arthur Clennam sits in a window of a coffee house on Ludgate Hill giving voice to the bells of nearby St Martin's: "At the quarter, it went off into a condition of deadly-lively importunity, urging the populace in a voluble manner to Come to church, Come to church, Come to church! At the ten minutes, it became aware that the congregation would be scanty, and slowly hammered out in low spirits, They WON'T come, they WON'T come, they WON'T come! At the five minutes, it abandoned hope, and shook every house in the neighbourhood for three hundred seconds, with one dismal swing per second, as a groan of despair." 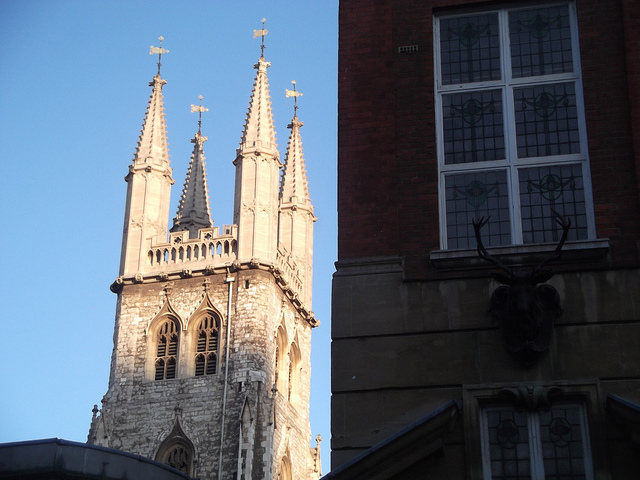 There is one bell whose knell echoes in much London literature. This toll seems to carry beyond the plausible range of hearing, beyond its own time even and on into legend. It is the death bell, or the "passing bell".

"Only the sound of melancholy bells —  The voice of Time — survivor of them all!" wrote Thomas Hood ending his sonnet Midnight in 1822. In Newgate Prison, 1605, a handbell (the Execution Bell) was rung outside the condemned mens cells the midnight before a hanging. During and after the killing, the great tenor of the church next door would take up the monody and, as the chant went, "When St Sepulchre's bell in the morning tolls / The lord have mercy on your souls."

That the bell rung in death could, later in the day, celebrate a christening, shows the scope for the intended language of any one bell and the complexity of the messages they are capable of sending through time. For Shakespeare's Macbeth, at the behest of his wife who rings a signal, he goes to kill Duncan: "I go, and it is done; the bell invites me". Shakespeare, who completed Macbeth in 1606, would probably have entered the city at Newgate from Stratford-upon-Avon; even if he didn't go to witness, he could not have ignored the bells.

For the underwriters at Lloyds bank, a bell retrieved from a shipwreck off the Dutch coast in 1859 and installed in their rooms in the years after, was also impossible to ignore. The Lutine Bell came from the French frigate La Lutine, which surrendered to the British in 1773. Six years later, carrying a cargo of gold and silver insured to the tune of £1 million, she sank and the claim was paid in full.

The bell was traditionally struck with news of an overdue ship; once for bad news (a loss), twice for good (a return). Her presence in the underwriting room would make this announcement simultaneous to all clerks, but her voice is no longer needed. In 1989 she heralded a ship home for the last time and now rings only in commemoration, or in the event of a death in the royal family. During the Battle of the Atlantic a half century previous, the Nazi radio propagandist Lord Haw Haw announced the bell's continuous ringing during the German offensive. In fact she rang just once – when the Bismarck was sunk.

The quiet of bells is as potent as their sound. During WWII in London and across the nation, no church bell was heard during the conflict – not until they could ring out in peace. In 1940, amidst the Blitz, Winston Churchill backed the profound, collective moment of meditation on the BBC called the Silent Minute. At 9pm each night, ushered in by a transmission of Big Ben, the nation would pray for freedom and a resolution to the war. "If enough people joined in this gesture of dedicated intent," declared Major Wellesly Tudor Pole, the Minute's instigator, "the tide would turn and the invasion of England would be diverted". In 1965 the bells of London were temporarily silenced once more after the death of Churchill. In 2013, Margaret Thatcher was granted the same honour to the scalable consternation of the people.

These ubiquitous time machines continue their singular broadcasts into and over the heads of Londoners past, present and future. Their sound fills up the spaces between each listener and resonates dutifully off the changing topography of the city. They are a feat of interconnectivity, they remind the listener that "no man is an island, entire of itself". Those words belong to John Donne, a dean of St Paul's Cathedral (where the bell Great Paul hangs), who then declared: "Never send to know for whom the bell tolls; it tolls for thee" – unless, that is, it rings from some other Londoner's pocket.

By Bryony Quinn. All photos, except the top image, by M@.