Stargazing In London: Top Tips From The Royal Observatory

By Londonist
Londonist Stargazing In London: Top Tips From The Royal Observatory

For a more comprehensive and up-to-date (2022) guide to stargazing in London, click here. 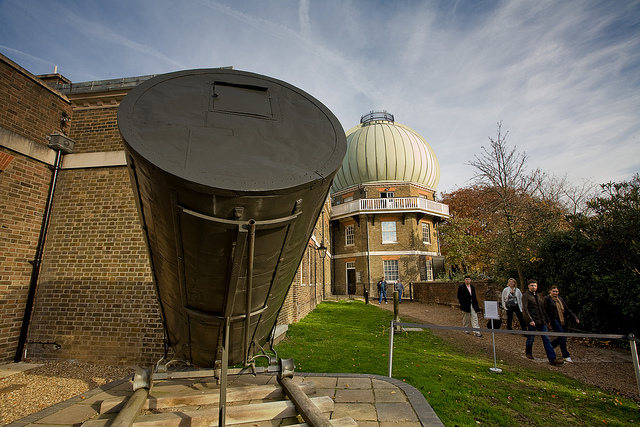 A telescope at Greenwich, by Nick A in the Londonist Flickr pool.

Suggest stargazing in London and most people will assume you’re planning a trip to Leicester Square on BAFTA night. When they realise you mean the heavenly variety, they’ll look at you in frank disbelief.

London is one of the most heavily light-polluted cities in the world but that doesn’t mean it’s impossible to see not just the odd star but entire constellations.

"At the very worst place in London you can still see a couple of hundred stars,” says Tom Kerss, Planetarium Astronomer at the Royal Observatory, Greenwich. “From Trafalgar Square, even with the Christmas tree you can see Orion, Jupiter, Pleiades…if you acclimatise your eyes.”

And that’s the secret. It’s all in the darkness within your own eyes. Finding as dark a place as possible is important, but if you have the patience and determination to work with yourself, the heavens will reveal themselves in surprisingly light places.

“There are two aspects of light pollution,” says Dr Marek Kukula, Public Astronomer at the Royal Observatory. “The first is the combined glow of artificial light reflecting on clouds and vapour”. There’s not much you can do about ambient light pollution, known in polite circles as ‘sky glow’. “The only thing is to go as far away from London as possible.”

The other aspect, direct sources of light – street lamps, security lights, car headlamps, neighbours’ windows – are more easily dealt with. Get away from these immediate bugbears – sometimes by just going round a corner or standing where a bush is in the way of that irritating security lamp - and instantly your chances are improved.

“Create your own dark spot,” says Kukula. “Any back garden with bushes blocking the neighbour’s lights will probably be good. There’s always somewhere – graveyards, car parks, school playing fields, heaths – just make sure the owner’s okay with it.”

Here comes the tedious bit. You just have to stand there and wait for your eyes to work out that it’s dark. “It takes a good 20 minutes of standing and looking into the night to get fully dark-adapted,” says Kukula. “You want your pupils to dilate, to let as much light in as possible. One car headlamp, thoughtless torch-switch or neighbouring bathroom light and you’ll have to start all over again.”

One good tip is to use a red torch, which doesn’t disturb the eye’s ability to see darkness so much. You don’t need to buy one – just eat a couple of Quality Street Strawberry Delights (easily found, they’re the ones that are always left over after Christmas…) and pop the wrappers over the end of an ordinary torch.

Or you could stare through a cardboard toilet roll tube. “If you’re using telescopes or binoculars you’re essentially harvesting light,” says Tom Kerss. The toilet roll tube will have a similar effect and help to block out other sources too.

Of course it’s even better if you actually have a telescope or binoculars, even very basic ones. Indeed, it’s actually best to start out with basic kit – using equipment that’s ridiculously complex can just end in frustration, especially if you’re already freezing cold and sick of staring through a toilet roll.

“The vast majority of the light pollution in cities is from the classic orange sodium street lamps,” says Marek Kukula. “A simple sodium light filter will block that. It’s easy to buy filters, but an astronomy group will already have them.”

And that’s the next tip. Join a group – of which there are a surprisingly large number in London.

Astronomy is one of the few cutting-edge fields of science where amateurs make a real difference. The universe is so huge professionals could never cover all of it and ever since astronomy began an army of amateurs, both individually and in groups have been adding important data to our knowledge of the skies. Today, amateurs regularly discover new comets and super-novae and monitor individual stars. The Galaxy Zoo project, for example, crowdsources the help of thousands of passionate amateurs, who classify the millions of galaxies revealed by powerful telescopes.

The purely amateur British Astronomical Association, formed in the late 19th century, largely because the Royal Astronomical Society wouldn’t allow women (they do now, of course), is a great first-base.

There are many advantages to joining a group, not least for access to someone who knows what they’re doing. You can also gain access to specialist equipment and, even more importantly, to dark areas normally closed to the public. The Baker Street Irregulars, for example, not only have a fantastic name, but are also able to meet in Regent's Park after lock-down.

Another advantage of groups is local knowledge. The Flamsteed Astronomy Society, based at the Royal Observatory, meets on Blackheath. “Blackheath is not very dark,” admits Tom Kerss, “it’s lit up like a Christmas tree, but the Flamsteed Society have made the best of a bad job, they know where the darkest bits are and it’s both accessible and safe.”

Staying safe is actually an important thing to bear in mind. Dark places carry their own special issues and it’s not just the obvious ones of Bad People, bugaboos and vampires. It’s easy to fall into holes, trip over stuff, get yourself into trouble for trespass or just get ridiculously cold. Remember, there’s safety in numbers, wrap up warm, get permission for private land and start munching those Strawberry Delights. 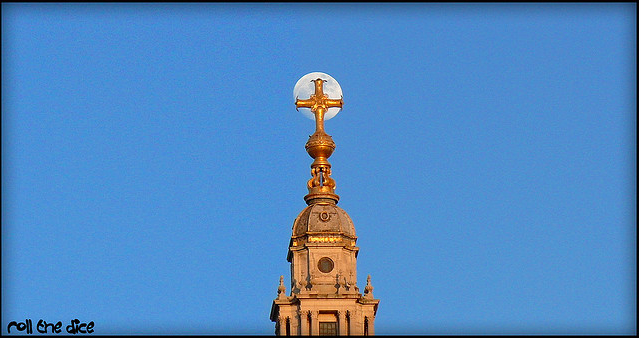 The cross of St Paul's eclipses the moon, by Roll The Dice in the Londonist Flickr pool.

What to see right now

The Moon
Lunar craters and mountains are easily visable with binoculars. The Moon can be a bit of a nuisance when it’s full, though, so unless you’re actually studying it, choose an evening when it’s not creating its own light pollution.

Planets
Venus – just after sunset in the western sky at the moment.
Mars and Jupiter can be seen at around 3am

Stars
Orion – look out for his multi-coloured belt
Cassiopeia – the big ‘W’ in the sky
Taurus – with Aldebaran, an orange star so bright people mistake it for Mars
Pleiades – also called the ‘Seven Sisters’. A test of eyesight since ancient times. In London most people can pick out around six stars; if you really let your eyes adjust, you’ll see 13 or 14. Through a telescope you’ll see hundreds.
Pegasus – a good one for Autumn

Galaxies
Milky Way — If you look at Venus right now, you’re looking directly into the the densest part of our own galaxy.
Andromeda – our nearest neighbouring galaxy, 2 ½ million light years away.

Meteors
Shooting stars can be seen throughout the year, but meteor showers are the most dramatic. The next big shower will be the Geminids, at their most spectacular between 10-12 December. The International Meteor Association is a good source of information and advice.

Man-Made Objects
International Space Station — Easily seen with the naked eye and the third brightest object in the sky since it overtook Venus by adding more modules. Give ‘em a wave. It's visible from London most nights, though often close to the horizon. NASA publishes details of where and when to look.
Satellites – often mistake for shooting stars
Hubble telescope – can be viewed with binocuilars
Heavens-Above  or Calsky will tell you where to look for manmade objects.

Most clubs welcome visitors. Some charge a fee, others are free. If you attend regularly they normally like you to join.

If All Else Fails