Pitting Cyclists Against Drivers Is A Bloody Stupid Idea 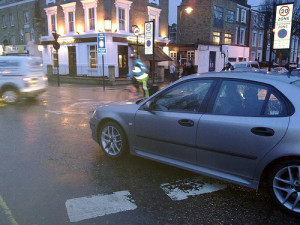 A shocking research finding from the universities of Bath and Brunel: no matter how visible cyclists make themselves, no matter how experienced they look, some drivers are always going to overtake in a way that might just kill them.

Not all drivers, admittedly: under 2%, in fact. But 2% of the number of cars who pass in the average journey might be quite a lot, and those drivers are going to come stupidly near to you whether you're a little old lady or Chris Hoy. Even those wearing high visibility vests reading "Novice cyclist" will be treated in exactly the same way, the study found. As Dr Ian Walker, the Bath psychologist who led the project, says, “No matter what you wear, it will do nothing to prevent a small minority of people from getting dangerously close when they overtake you”.

Well knock me down with a bloody feather. Who could possibly have guessed?

"But what about — " the drivers among you are no doubt itching to respond. What about the majority of decent drivers, trying their best to predict the behaviour of incompetent and un-roadworthy cyclists? What about those cyclists who act like bloody fools?

And it's a fair point. There will always be those, in every category of road user, who like to dice with death – their own, or others’ – just as there will always be some who just don't know what they're doing. Some of them are cyclists; some are driving cars, or HGVs. Some of them are even pedestrians. At some time or another, we'd be willing to guess, one of them has been you.

And – that's the point. The lesson of this latest study isn’t “cyclists good, drivers bad”. It’s that there are always going to be people on the roads making idiotic decisions. It’s no good the powers-that-be sending out phalanxes of police officers to lecture cyclists into being less stupid. Stupidity is a statistical inevitability. What we actually need to do is to redesign our roads to make it less likely that stupidity is a fatal condition.

One reason that the authorities have shown so little urgency about doing any of this, we suspect, is that the debate constantly gets diverted into different groups of road users throwing rocks at each other. Every accident involving a cyclist is greeted with a hailstorm of accusations. That the driver wasn't looking. That the cyclist wasn't thinking. Sometimes these are true. Sometimes, they are not.

But this ongoing war of words is not only distracting: it’s actively damaging. There are public authorities who are meant to be responsible for making our roads better. By blaming each other, we’re letting them off the hook.

Image courtesy of D1v1d, taken from the Londonist Flickr pool