New Writing And New Ethics At The New Hope Theatre 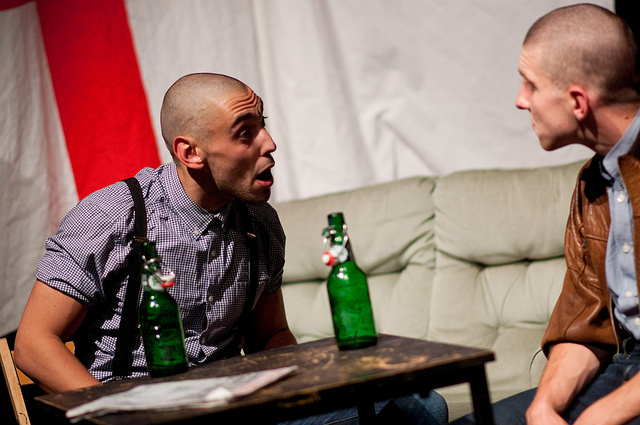 The first night of a new London theatre is something to celebrate, and all the more so when it challenges the way the fringe works. Adam Spreadbury-Maher, who set up the now-defunct Cock Tavern Theatre, has worked with Islington fringe institution The King’s Head to deliver an important boost for Islington theatre. But more than that, this is a new type of fringe venue: one that pays the actors.

The dirty secret of London’s widely envied theatre scene is that, more often than not, actors in the smallest venues work for free or for very little. The Hope Theatre, upstairs at famed punk venue The Hope and Anchor pub on Upper Street, is hoping to change that. They will be paying everyone who works on their shows the national minimum wage. While it is depressing that theatre is starting from scratch on something as basic as pay, The Hope deserves praise for its ethical stance.

Meanwhile on stage, the first two shows illustrate The Hope’s plans to show nothing but new writing. Both won awards at this year’s Edinburgh Fringe: Sandpits Avenue a Herald Angel, and League of St. George the National Student Drama Festival Award. Both plays need support from London venues such as The Hope to create a life beyond the Edinburgh bubble.

Both plays deal with teen alienation and boredom, across two generations. Yasmin Blake’s Sandpits Avenue lays out the deadly predictability of Shropshire small town life - Friday night in the pub, Young Farmers’ dances once a year, lines of coke in the club – and breaks it into pieces as the horrors of Afghanistan intrude, changing a small group of friends for good. The show is inventive – including physical scenes, songs by Nathalie Wain, beat-boxing, tea-chest slapping and more. However, the rhyming couplets are perhaps a step too far, keeping the audience at arm’s length from the characters.

League of St. George, by Georgia Bliss, explodes on to the tiny pub stage in a riot of Oi! Punk, skinhead stomping and V-flicking. The date is 1984 and the excitement of the music and the skinhead gear is played up to the full, as is the racism. The play, highly appropriate in the room where bands such as Joy Division, The Specials and The Stranglers played, cleverly uses a live band to conjure up the empowering lure of the new music for dysfunctional young men, while picking apart the brutality and the sheer childishness of race hatred, fuelled by poverty and right-wing cranks. The gay relationship between Adam and Nilay, excellently played by Oliver Tunstall and Craig Mitchell, is touchingly, maturely written, and there is a neat, understated ending.

Many people will be keeping an eye on The Hope over the next few months to see how their balance sheet works out. Everyone interested in the future of London theatre should keep their fingers crossed that Spreadbury-Maher’s bold initiative succeeds and that this becomes an important place to see new, enquiring, experimental plays on London’s underpaid fringe.

Sandpits Avenue and The League of St. George are at the Hope Theatre, 207 Upper Street, London N1 1RL until 30 November. Tickets £14 / £12. To book visit the theatre website. Production image by Owain Shaw.