6 Reasons Why Drinking Wine Is Cool In London 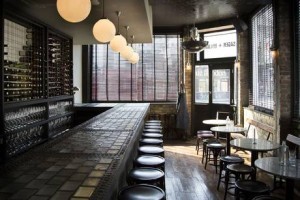 It’s hip in Hackney
That automatically makes everything cool, right? Sager & Wilde opened up a couple of months ago on Hackney Road, and has been packed pretty much ever since. It has a New York-esque decor with dark wood and Venetian blinds, which you’d associate more with Negronis and Old Fashioneds than Rieslings and Riojas. It’s young, hip and very East London, but at its heart is an affordable list of well over 20 wines available by the glass, and plenty more by the bottle to drink in or take away. Wine-led restaurant Raw Duck at Hackney Central is another example, while Noble Fine Liquor on Broadway Market and 259 Hackney Road are two popular, modern and well respected wine shops also in the borough.

New bars are opening up by the week
Well, almost. London is full of longstanding, old school wine bars, many of them which have excelled at their art for more than 50 years and continue to do so. Right now though, we’re lucky to be seeing more and more new wave ventures join them. This week alone has seen the launch of Remedy in Fitzrovia and Sign Of The Don in the City. We’ve also recently seen small group Vinoteca expand into Chiswick for its fourth branch, and in recent times have gained Toast in East Dulwich, Bar A Vin at Quality Chop House in Farringdon, 40 Maltby Street on Maltby Street Market and many, many more. What these ventures tend to have in common is an accessible nature, a younger clientele, a leaning towards affordable options and plenty available by the glass.

It's popping-up and hitting the streets
The girls who run A Grape Night In are almost as cool as the name of their business. As well as offering to host wine tastings at your own gaff, they’ve now launched The Vinter Bar pop-up in Balham. It runs every Friday from today until 20 December and focuses on wine from cooler climates, served alongside generous helpings of hearty dishes such as comté mac ‘n’ cheese. Next week also sees the innovative Wine Car Boot take place for the second time in Southwark where you can sample and buy from many of London’s top wine shops in one place. Forget street food, this is street wine.

We’re embracing BYO
And its not just for curry houses or student suppers. From Bloody French on Westbourne Grove to Rochelle Canteen in Shoreditch via The Seagrass in Islington, there are plenty of higher-end options which allow you to buy a good bottle of wine to enjoy with your meal without paying the restaurant mark-up. Every Monday you can take part in Hawksmoor’s Wine Club and take your own vino — corkage is £5. Then, of course, there are all the supper clubs…

London is pretty much leading the world in Natural and Biodynamic
It’s a bold statement, but not far off the mark. Few cities around the UK or world have anywhere near as much time for these oft-pungent, sometimes fizzy, unreliable but always charming wines. French importer Les Caves de Pyrene are at the top of the Natural Wine market, and run restaurants and wine bars Terroirs, Brawn, Green Man & French Horn and Soif in London. At The Corner Room in Bethnal Green, chef Nuno Mendes serves only Natural Wines, and London is home to not one but two annual wine fairs in its honour - RAW and the Real Wine Fair.

We’re even making it ourselves
There’s a teeny tiny micro-vineyard in allotments close to Kings Cross station, but more significantly Forty Hall Vineyard in Enfield features 10 acres of vines, primarily Pinot Noir, Meunier and Chardonnay for the production of a sparkling wine similar to Champagne. These are likely to be the source of London’s first commercial fizz. You can read more about both projects on London My London.

Do you think drinking wine is cool in London? Where do you drink it and have you started to drink more of it? Let us know in the comments below.