We’re partnering with Sound and Music, the national agency for new music, to introduce you to some intriguingly creative cultural events.

In November, we're sending our new music samplers into space and out to Maida Vale. Want to go too? Read on.

Bet that headline got your attention. Space Fight are an "audio-visual live band" comprising saxophone, electric guitar and electronic hardware. Their set is inspired by sci-fi novels by P.K. Dick and S. Lem and one piece uses satellite ozone data from NASA and the Stockholm Environment Institute to control the improvisation and visuals. Yep, this is pretty nerdy but zoom out from the detail and you can expect "acoustic contemporary jazz improvisation collided with glitchy electronic rhythms and ambient guitar riffs". Get a feel for it with this trailer. 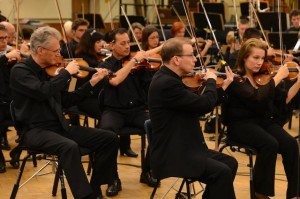 At this intimate concert in the famous BBC Maida Vale Studios, you'll hear the premieres of Coult's Codex (Homage to Serafini), Holloway-Nahum's The Deeper Breath to Follow and Oliver's Lullaby for Joni.

Also on the bill, "galactic power on a compact scale" with Emily Howard's Solar and Robin Holloway's In China, a musical response to the visual stimuli of a visit to China, "ranging from the vastness of the physical landscape to the exploding urban chaos".

Interested in more events like these? Browse listings in The Sampler.  See what our samplers made of The Night Shift, London Sinfonietta playing Stockhausen, and contemporary classical club nights Nonclassical and Blank Canvas.