London’s annual jazz invasion opens on 15 November and, as every year, the city’s clubs, pubs, concert venues and churches will open to all varieties of improvised music. Tickets are already selling fast, so use our guide now to choose your gigs.

The 2013 festival boasts more than 60 venues, a number so impressive that it warranted mapping, see below. Red pins denote pubs, clubs and theatres; yellow pins are for arts and community centres; and the blues pins cover the rest, such as churches and historic houses.

Seeing the lie of the land for the festival geographically throws up some interesting visual nuggets. As always in this city, south London is lamentably under-served. The Soho cluster of clubs is to be expected, as is the amount happening in Camden, but who knew so many arts centres – big and small, from the giant Barbican Centre to boutique venues like Rich Mix – nestled together in the east? What is perhaps most striking about the map is that it shows that pubs and clubs — in red — are at the heart of the festival. While headline acts appear at the Barbican or Southbank centres – or Ronnie Scott’s – it is the smaller venues, all over town, that make the LJF a proper city-wide music festival.

To celebrate the diversity of music, musicians and buildings that make up the festival (there are a whopping 250 gigs in all), we have put together a list of ten artist and venue combinations — one for each day of the festival — that particularly suit one another:

FREE
Jazz on 3: Adventures in Sound @ Cafe OTO – Saturday 16 November, 2pm
Both the music and the price tag are free here. Dalston’s home of experimental music and sound, Cafe OTO, hosts BBC Radio 3’s Jazz on 3 programme for an afternoon of short sets of free jazz and improvisation. 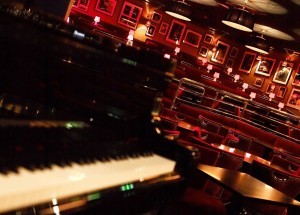 ROYALTY
Christian McBride @ Ronnie Scott’s – Monday 18 November, 7.15pm
Bassist Christian McBride is an elder statesman of jazz, with a long career as a bandleader and a stellar sideman with artists including Sonny Rollins, McCoy Tyner and Herbie Hancock, among many others. He plays the king of London jazz clubs (interior, pictured right) for two nights: Monday 18 and Tuesday 19 November.

HEADLINE
Brad Mehldau & Mark Guiliana + Sons of Kemet @ Barbican Centre – Thursday 21 November, 7:30pm
There are many headline gigs throughout the ten days and although this isn’t necessarily the biggest of the bunch – the 80th birthday of sax legend Wayne Shorter on 17 November, also at the Barbican, probably is – but it may well be the best. Superlative American pianist Brad Mehldau, an LJF favourite, is joined on the bill by a new, raucous quartet of some of London’s finest jazz talent, Sons of Kemet. 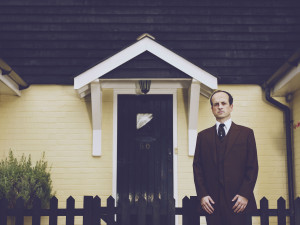 EXPERIMENTAL
Matthew Herbert @ Queen Elizabeth Hall – Friday 22 November, 7.30pm
Composer and sound artist Matthew Herbert (pictured) brings his latest project, album The End of Silence, to the QEH, which, love it or hate it, was conceived as a radical architectural space.

ART
Tim Whitehead @ National Maritime Museum – Saturday 23 November, 1pm
Saxophonist Tim Whitehead was previously artist in residence at Tate Britain, where he developed his Turner and the Thames series, exploring the relationship between music and art. This free performance in Greenwich dovetails neatly with the museum’s own Turner and the Sea exhibition.

BIRTHDAY
21st birthday celebrations @ Southbank Centre – Sunday 24 November, from midday
The London Jazz Festival moves into fully fledged adulthood this year. The festival closes with an all-day birthday party at Southbank Centre, which celebrated its own milestone birthday — 60 years — a couple of years ago.