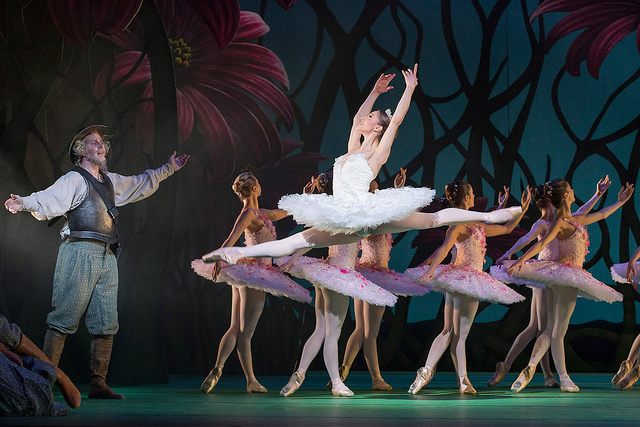 At its heart, Cervantes's novel Don Quixote is a fundamentally troubling tale of a delusional elderly man who wrongly believes he's a knight errant on a chivalrous quest. Trust the Russians to turn this heartrending tale into a frothy, fan-waving, castanet-clacking confection of a character piece. A favourite of Russian repertory companies, Don Quixote is a rarer choice for British companies; this new production choreographed by Carlos Acosta hopes to find the confused Quixote a welcome home in London.

The story wisely focuses not on the eponymous fantasist (danced by the gifted character artist Will Tuckett) but rather on the young couple Basilio and Kitri. Sexy and playful as Kitri, Roberta Marquez looks like she's really enjoying her first buoyant, fan-tapping solo. The stage is stolen, however, by Alexander Campbell’s Basilio, who brings to the role a combination of vivid grace and raw sex appeal that puts one in mind of – yes –  a young Carlos Acosta. There's a genuine affection and chemistry between the two stars that radiates to the back of the auditorium and serves the ballet's romantic plot well.

Even this slight plot is secondary to the ballet's true purpose, however; Don Quixote is less a story ballet than a vehicle for a series of lively, Iberian divertissements designed purely to show off the bravura talents of the company. Toreadors whip their velvet capes through the air, villagers rattle tambourines and gypsies dance the fandango. Narrative is not what lies at the heart of Don Quixote; instead, it’s heaps of flashy fun.