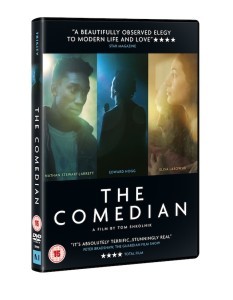 From the producers of the critically acclaimed feature Weekend comes The Comedian. The plot follows 30-something Ed (Edward Hogg), a call centre worker by day and an aspiring (and not so talented) comedian by night.

Filmed mostly, if not all around east London, this low budget, mumblecore feature explores the versatile nature of sexuality, the distinct loneliness of living in the big smoke and the continual chase of aspirations.

The Comedian paints a rather dismal portrait of London as a cold and critical city, one that many of us can relate to. Ed and housemate Elisa’s close friendship spills into the romantic sphere but is rudely interrupted with the arrival of the young and beautiful Nathan.

The film dances around the idea of sexuality; instead, what is paramount here is the inability to connect and successfully make sense of feelings. The glamorisation of being lost in a city and confused about your destiny is achieved through the filming style, long takes with minimal editing and improvised dialogue.

Director Tom Shkolnik experienced similar feelings on moving to London from Israel in his 20s: “Suddenly I was in a city that had limitless options and an enormous wealth of culture and art. I fell in love with it... But, like falling in love, it fades with time... Suddenly London seemed like a hard place. What once felt like freedom started to feel like loneliness.”

The cast is fantastic. Channel 4's Utopia and Misfits star Nathan Stewart-Jarrett plays Nathan, a 20-something artist and the most hopeful and endearing character in the film. Elisa Lasowski (Shane Meadow’s Somers Town) is effortlessly soulful in her portrayal of Ed’s intimate friend.

The Hackney filming locations are a genuine treat to see and Shkolnik, a resident himself, says: “Hackney is the centre of the youthful culture of London. Everyone seems so young and beautiful, it makes being over 30 feel like you are knocking on deaths door! This is part of the story of the film.”

In a particularly perceptive and realistic sequence, a group of rowdy teenage girls on the top deck of a night bus start howling homophobic remarks at Ed and Nathan. Shkolnik used non-professional actors for this sequence and during rehearsals he would encourage the teenagers to hail abuse at him in order to get the naturalistic performance just right.

Shkolnik knows exactly how it feels to be lost in a huge city. If you are keen to enjoy a London-based feature that deals with serious issues in a low key, unorthodox manner, The Comedian is for you.

The Comedian is available on DVD now.