Dining Beyond Zone 1: The Courtesan 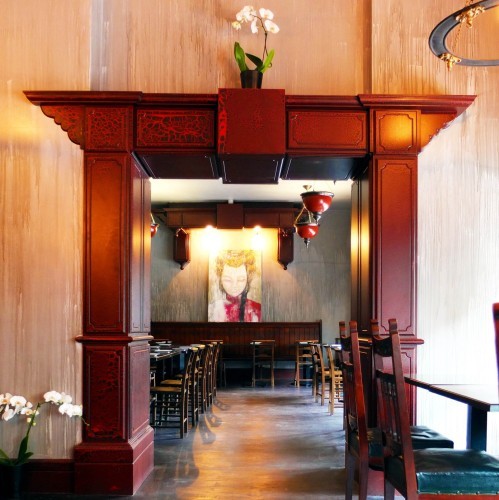 For all the noise made about still oh-so-trendy Brixton Village, there’s barely a squeak to be heard about other dining options in the area.  That’s not to say that there aren’t any, of course. In fact, several local spots have opened with far less fanfare over the past months and years, including The Courtesan, just a touch further up Atlantic Road than any Village visitor would need to travel.

Just over a year old but recently refurbished and re-imagined, it’s lately received some attention by way of a particularly unflattering Evening Standard review. It’s fair to say that our experience was very different.  They say first impressions count, and on walking up to The Courtesan, there’s something deliciously seedy-looking about its tatty red shopfront. All in all, it’s quite appropriate for a cocktail and dim sum restaurant which has a name inspired by prostitution.

While the Market and Village areas of Brixton have lost most of their shab in favour of shine, this feels rawer, edgier and, well, a bit more Brixton. That is — of course — exactly the point, and with dim sum dishes  in excess of a fiver and cocktails supping up the best part of a ten pound note, there’s no denying that the gentrification wave is being ridden, even if the paintwork doesn’t reflect it.

The inside is better tended to, and more dramatically themed than a vintage episode of Changing Rooms. There’s dark wood, low lights, semi-erotic nudie paintings and a rippled wallpaper that is styled to represent the tears of the Courtesan. And the cocktail list is equally over-the-top. The Last Cigar blends lapsang souchong tea, Glenlivet whisky, chilli and a fig liqueur to create a surprisingly smooth and mature drink that leaves your throat warm and your taste buds smoked, while a delicate and silky Yang Yuhuan made of chamomile, rose buds, rum and lychee liqueur is intricately balanced and much less sickly-sweet than it sounds.

With cocktails like that, you need to get through a fair few dim sum if you hope to function the next day. At least, that was our excuse. Steamed Char Siu buns generously filled with caramelised, honey-roast pork are pillow-soft and pleasingly juicy; prawn dumplings are tender to the bite and kick back with a bold hit of wasabi; and spicy Szechuan ribs tick all the sticky, succulent and get-your-face-messy boxes. Previously unheard of Duck Puffs, which are kind of like buttery, crisp, duck-filled sausage rolls, are the highlight though — intensely peppery, indulgent and moreish.

We couldn’t approve more of the idea of the jerk chicken rice parcels, wrapped up in lotus leaves in a nod to the varying cultures of China and Brixton, but the rice-heavy, meat-light and chewy-leaved offering was far from The Courtesan’s finest offering. Perhaps we’d have been more grateful for a bit of stodge if we hadn’t already wolfed down a disgraceful number of dumplings, though.

The Courtesan is trying something different. In terms of inventiveness, the dim sum knock the socks off many a Chinatown eatery, and the barmen show great skill at creating smooth, subtle drinks out of arm-long ingredients lists. Much as its name suggests, this wily venue has everything needed to keep you entertained for the night and have you leaving satisfied, albeit a little lighter in the wallet. It wasn’t full when we visited, but rumour has it they’re about to start advertising in telephone boxes...