Archway Gets A New Literary Festival 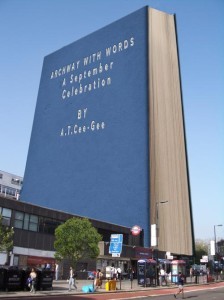 Archway's getting a week-long literary festival, starting Saturday. Organisers clearly had fun coming up with the name, going with the puntastic Archway With Words.

The festival's got some literary big-hitters – partly, it seems, because a load of authors live locally! So you can meet Joanna Briscoe, Caitlin Davies, Tracy Chevalier, Charlie Higson, Bill Paterson, Paul Morley and the creators of Rastamouse among others.

We also like the sound of Hammer and Tongue's Poetry Slam, with Stephanie Dogfoot, Sam Berkson and a feature set by the excellent Polar Bear; Tim Wells and the mighty Jah Wobble will be a mesmerising pair; and John Hegley's performing a new piece.

There are also a few less literary events: join a Wuthering Heights flash mob, chuckle through a comedy night or take the kids to an Alice in Wonderland themed party on the closing day. Archway With Words runs 21-28 September; take a look at the website for more details of events, venues and to book.