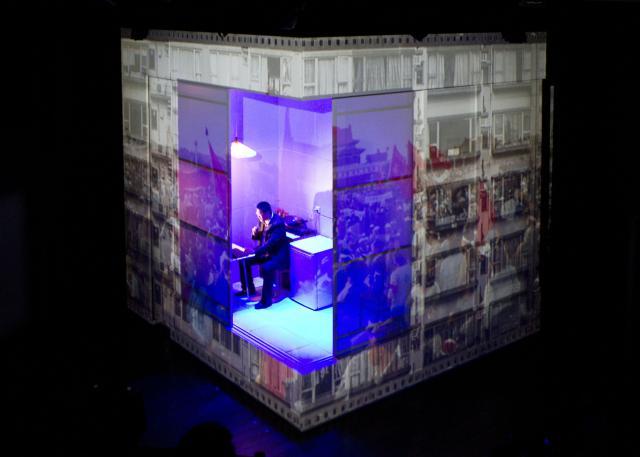 Did you miss Lucy Kirkwood’s highly lauded play first time round at the Almeida? Well, you’re in luck! Nope, not because it was overrated, but because it’s bloody good and has now transferred to the West End, so you can catch it at the Harold Pinter Theatre until 19 October. Score.

Chimerica imagines the story behind the unknown protester who famously faced down a row of tanks leaving Tiananmen Square after the massacre of civilian protesters in June 1989.

In Kirkwood’s play, American photojournalist Joe Schofield (played by Stephen Campbell Moore) took the most widely used shot of the incident. Two decades on, he makes it his mission to discover what happened to ‘Tank Man’. Who was this guy? What was his story? What became of him?

Obsession takes hold and Joe will stop at nothing to find him, jeopardising not only his relationship and his job, but also a US senator’s career, the livelihoods of two immigrant Chinese workers and the safety of his friend and Beijing contact Zhang Lin. Meanwhile, what he’s in search of has been staring him in the face the whole time.

Benedict Wong gives a beautifully pitched performance as the alternately gentle and wildly impassioned Zhang Lin, haunted by the loss of his wife (an effervescent Elizabeth Chan) in the Tiananmen Square protests. Claudie Blakley gets a lot of laughs as Tessa, consumer profiler and love interest of Joe, as does David K S Tse as Zhang Lin’s anxious, dutiful brother Zhang Wei.

Part political thriller, part love story, this super-fast-paced play will hold you in its thrall for the duration. It’s been in the making for six years, and there’s so much going on here, it’s clear why. Kirkwood tackles loads of issues in this three-hour epic, from the power of images, freedom of the press, ethics of the media and the complicated relationship between the two world superpowers, China and the United States, to love, friendship, parenthood, bereavement, family responsibilities, moral duty. Ambitious? Certainement. Competently realised? Oui.