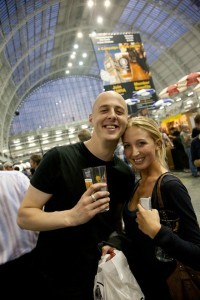 Normally, a bank holiday is enough to make it an interesting month for beer festivals.  Yet August also heralds the mighty GBBF, which this year competes with the London Craft Beer Festival for your patronage - check out our comparison of the two events if you're struggling to make a choice.

The Great British Beer Festival, Olympia. The 2013 edition of this renowned festival features more than 800 ales, ciders, perries and foreign beers - need we say more? Whet your appetite by browsing the beer list online, or by buying your tickets (from £8) in advance. Doors open at 5pm on Tuesday, 12pm on Wednesday-Friday and 11am on Saturday.

London Craft Beer Festival, Bethnal Green. Featuring some of the trendiest names in the craft beer scene, this festival is divided into five hour time windows, during which time you can sample all the beers, enjoy live music and graze at a variety of food stands. Entry to a session, including a third of every beer on offer, is £35.

The Duke of Wellington, Dalston. Enjoy the fruits of East London's burgeoning brewing scene at this festival, which features ales from both established and budding breweries. CAMRA members get a 10% discount, and they'll also be showing the fifth Ashes Test in HD.

The Alma, Islington.  The pub's August Cider Festival offers to quench your bank holiday thirst with a variety of ciders and perries. As well as the beverages, a wide range of musical acts will be performing everything from folk to reggae, and entry is free.

The Red Lion, Isleworth. If you miss the GBBF, check out some of the festival winners at the Red Lion's Champions Beer Festival, which also features live music, and a barbecue every day. For more information on the ales available, see the festival beer list on their website.

The Orpington Liberal Club, Orpington. Combined with the Orpington Folk 'n' Blues summer party, this musical affair boasts an interesting variety of beers and ciders at £2.70 a pint. Tickets can be bought online at least 48 hours in advance, or are £5.40 over the bar, and each gives you £5.40 worth of credit to spend on food and drink. The festival runs from 11am to 11pm.