The London Buildings Of Richard Rogers

Richard Rogers is undoubtedly a superstar architect, responsible for such international landmarks as Paris’s Pompidou Centre (designed with Renzo Piano) and the Law Courts of Bordeaux. But his biggest impact has been on the London skyline and street-scape.

A much-deserved exhibition of his work opens at the Royal Academy this month. To truly appreciate his creations, though, all you need to do is walk around the city. This way you’ll spot his designs – which are shaped by political, social and ethical concerns, as well as pop culture, art, technology and urbanism – in their natural habitat. To guide your wanderings we’ve picked out 10 landmark Rogers buildings in London.


One of Rogers’ most iconic creations, the Lloyd’s Building on Leadenhall Street, fondly referred to as the Inside-Out Building, was a truly radical structure for the Square Mile. Famously, the building’s services – lifts, ducts and so forth – are found on the exterior. Such clever (albeit unexpected) use of space is a Rogers signature. It’s the youngest building to receive a Grade 1 listing – this happened only 25 years after its completion. Influenced by the work of Archigram in the 50s and 60s, the 88 metre tall building features 12 glass lifts, the first of their kind in the UK, three main towers and three service towers around a central, rectangular space. The entire creation encapsulates Rogers’ view that buildings are meant to give a public performance, both for the user and the passerby. Perhaps the most surprising feature, though, is an 18th century Robert Adam drawing room, reassembled from previous Lloyd's offices.


Clad in pewter-coated powder-grey aluminum and glass, the Channel 4 headquarters on Horseferry Road, Pimlico is built to reflect the company – innovative, socially aware and risk taking. The entire complex is made up of 15,000 square meters of offices, broadcasting suites, studios and a landscaped garden square. Once again, a bank of lifts rise and fall on the outside of the building. The most charming feature is the dramatic concave suspended glazed wall that guards the entrance. It’s enough to make you want a job in TV.


Originally housing the Millennium Experience, The Dome, the largest structure of its type in the world, is a London icon. Suitably symbolic, the twelve 100m high yellow support towers represent each month of the year – or each hour on the clock face. Its diameter of 365 meters reflects the days of the year. Such mathematical symbolism makes complete sense when you know that the building overlooks the Prime Meridian in North Greenwich. The shape is partly inspired by the Dome of Discovery, built for the Festival of Britain back in 1951, and the entire roof structure weighs less than the air contained within. Ingenious.


This site was previously occupied by a 1920s telephone exchange and the Rogers building — superficially similar to the Lloyd's Building — uses the extensive basement for plant. It comprises three linked blocks of office accommodation and an eight metre-high entrance lobby. The most arresting features are the numerous splashes of bold colour (a Rogers motif). This building is also rather intelligent. It allows controlled daylight to enter all the floors by using a combination of triple-glazed active facades, transparent float glass as well as blinds and perforated slats, which are controlled by photocells on the roof that respond to light and environment.

Standing in the Soho conservation area, Broadwick House is surrounded by Georgian housing stock, contemporary office blocks and high-rise apartments. And it appears to be an island – bordered on all four sides by thoroughfares. Solar performance glazing ensures energy efficiency while the ground floor facades are set back to keep pedestrians flowing. Just below the great arched roof you’ll also find a double-height space that offers up a stunning view of London’s West End.


Blending numerous influences, Terminal 5 opened in 2008 and looks like a weightless, long-span envelope, accompanied by a light-bathed internal space that is conceptually similar to that of the famed Pompidou Centre. The terminal’s curved, floating roof adds drama. Freestanding steel-framed structures — which house the departures, arrivals, check–in desks and other facilities — can be dismantled and reconfigured. Rogers is a sucker for practicality. Offering views across the airport and plenty of room, this is an ideal final (or first) taste of London design for the visitor to London. The distinctive air traffic control tower also comes from Rogers' firm.

The Maggie’s Centre was opened to the public in 2008 by Nigella Lawson and Maggie’s Patron Sarah Brown. The small orange structure supports a roof that appears to float. A tranquil garden leads up to the entrance. The interior is welcoming and light, thanks to glazed walls on the first level and openings through the roof. Quiet inside, despite being found on a corner of Fulham Road, the Maggie’s Centre was designed on a domestic scale and exudes a relaxed, homely vibe. The building’s heart is the double-height kitchen, which connects to three sitting rooms, library courtyard gardens and numerous other spaces meant for quiet, private conversations. The centre is dedicated to providing those affected by cancer with knowledge and support, making it an invaluable London asset. In 2009 it won the Stirling Prize for Architecture.

This ultra-highend residential development (prices starting at £20 million) in the heart of Knightsbridge consists of 86 apartments and duplexes within four interlinked 'pavilions' (or 'blocks' as normal people would call them). The structure offers captivating views of Hyde Park and Knightsbridge, behind unparalled security. Populated by Russian oligarchs and mystery billionaires, who typically only visit their apartments occasionally, the building has become a controversial symbol of London's wealth divide.

Luxury flats with Thames views just behind Tate Modern — this one's high on the desirability list. The 217 residential units in five separate buildings range from studios to four-bedroom penthouses. Timber screens create privacy and reduce solar heat gain while a cladding system controls the view in and out of the apartments. Thoroughly contemporary and designed to complement the buildings and materials of Southwark Street and Tate Modern, NEO Bankside reflects the areas ever-changing style. Probably out of your price range, though. 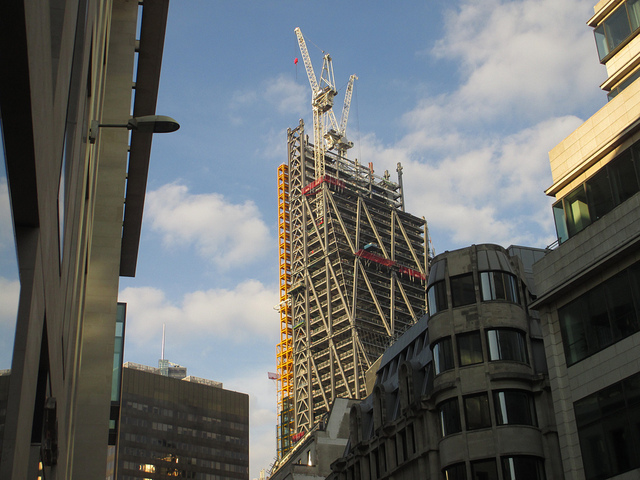 Affectionately known as the Cheesegrater, the still-under-construction Leadenhall Building is now the City of London's tallest (if one discounts the spire on top of the shorter Heron Tower). Its steel frame tapers towards the top, to protect views of St Paul's. Again, controlled blinds, vents and cavity-forming double-glazing allow outside air and light to enter the building. Built on a spectacular scale, and standing bang opposite the Lloyd's Building, this one's unique to London. See our report on the view from the top.

Richard Rogers: Inside-Out runs at the Royal Academy from 18 July to 13 October. Read our review.