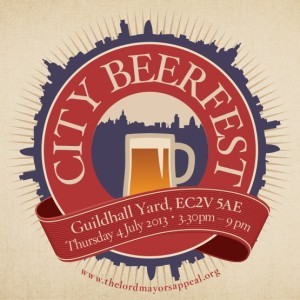 In beer festival terms, there are some proper summer blockbusters taking place this month. If we've missed any, please let us know in the comments.

More than 245 UK ales, ciders, perries, country wines and foreign beers will be available at the CAMRA Ealing Beer Festival, which is part of the Ealing Summer Festivals. Food, live music, pub games and meet-the-brewer sessions will also be on offer. Entry prices vary depending on the day and whether you have CAMRA membership. See the website for details.

Part of the City of London Festival, the one-day City Beerfest presents offerings from 12 UK breweries, alongside food, live music (6-8pm) and a coopering display from Theakston's. The festival takes place between 3.30pm and 9pm and entry is free.

The White Horse pub's incredibly popular American Beer Festival returns for a sixth year of hoppy beers, live music and the famous BBQ. A wide range of both respected American brews and English ales bearing their influence will be available.

Taking place in conjunction with the London Brewers' Alliance and Ales by Mail, the Wandsworth Common London Beer Festival boasts ales from all of London's 40+ breweries. More than 120 beers will be on offer and entry is £5, or £3 before 5pm. Book your tickets now because they're selling out fast.

Will Britannia rule? Find out at the second installment of the British Craft Beer Challenge, which pits beers from the UK against those from America. Your job is to help decide which beers come out on top - it's a tough job but someone's gotta do it. Tickets start from £7 in advance.

Tootopia, the beer festival-cum-pub crawl returns to Tooting. Roam between six pubs, all serving serving a different selection of ales, and enjoy special festival events such as vintage stalls, a Mad Hatter's Tea Party and the beard competition.

Demonstrating that beer really is a broad church, the London Vegan Beer Festival brings a selection of finings-free beers (ie. those made without the fish-based compound that is used to clarify liquids) to the capital. Taking place in St Margaret's Hall, the - hopefully smug-free - event combines a selection of vegan beers from well-known breweries with a vegan BBQ.  Tickets start from £7.50 and the festival runs from 12pm to 10pm.

The pub's four-day beer festival focuses on breweries from London, and with a line-up  that includes Redemption, the Ha'Penny Brewing Company and Camden Town, it's easy to see why. Entry is free, and you can find opening times and a full brewery list on their Facebook page.

Newly re-launched Borough pub The Miller starts as it means to go on, with a cider festival that features ciders, perries and ales from more than 50 producers. Not only can you get beers from the likes of the Kernel and Sambrooks for just £2.50 per pint, but food from Street Kitchen and live music will also be available. The festival takes place between 12pm and 1am, and entry is free.