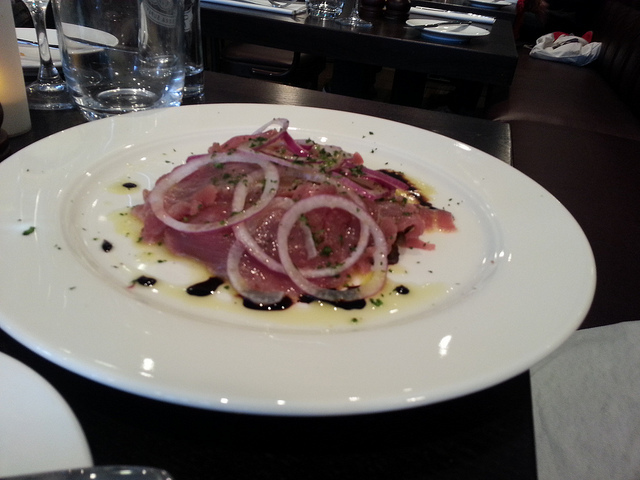 A few minutes away from Lee train station is perhaps not the most auspicious place to open a new Italian restaurant, mainly because most of you are now thinking "where?". It's south east London, two stops down from Lewisham. And Luciano's is another thing to add to the list that locals reel off when tube-lubbers get sniffy about the area.

Owned by a family of Neapolitans who already run one restaurant in Paris, Luciano's has been open less than six months and it's already wise to book on a weekend. (If you don't, you'll probably be sent to have a pint over the road at the recently refurbished Lord Northbrook. This is, we admit, no hardship.) Once you're in, it's all sleek black wood, glass, chrome and leather surroundings – no cutesy suburban decor.

We started with baked melanzane, elegantly spiced meatballs big enough (though definitely not tough enough) to play golf with and a pile of fresh, melt-in-the-mouth tuna carpaccio. We could have then picked from a range of meat and fish, but we're traditionalists and went with carbs. The Parma ham pizza had a light base, not overburdened with mozzarella and almost entirely covered in meat, rather than briefly 'topped' with a few slivers. They also give you a proper steak knife to cut it with, something every pizza chain in the country should be doing as standard. A cream sauce over penne was balanced, not too rich or overpowering, and juicy prawns came with the shells intact so you can make them fight (what?) but sliced up the centre for easy removal.

By this point we were stuffed and probably shouldn't have gone for dessert, but the crème brûlée was hard to resist. It turned out to be a good decision: a thick custard rich with vanilla but the sweetness is offset by sharp citrus. Absolutely beautiful, and worth making the journey for alone. Look: Southeastern takes Oyster, it's not hard.

Luciano's London is at 131 Burnt Ash Road, Lewisham, SE12 8RA. Nearest train station is Lee. A three course dinner for three with an unnecessary amount of booze came to £107.