Sixty Swans Cause Ripples At The Royal Albert Hall 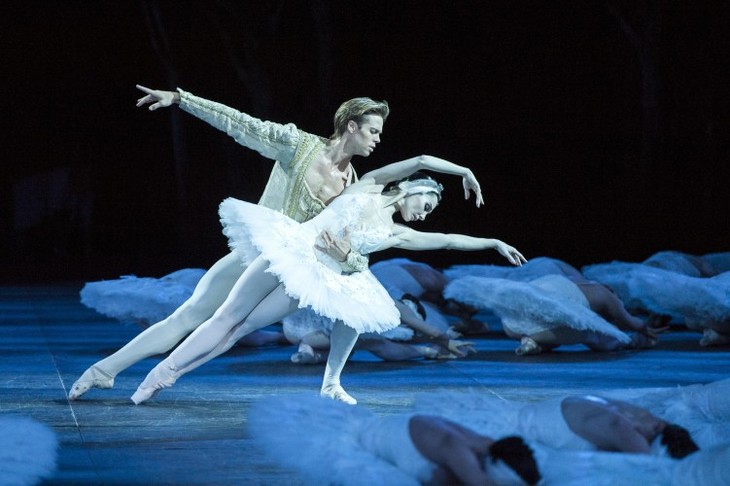 English National Ballet's Swan Lake takes place in the Albert Hall, the audience seated on all sides of the vast oval arena. The sheer scale of the production is a spectacle, and freed from the restrictions of a traditional stage there's massive scope for innovation in the presentation of Tchaikovsky's classic ballet.

A pas de trois becomes a pas de douze with four times the number of dancers as normal, while two sets of four perform the famous Dance of the cygnets, crossing over each other throughout. Acrobats and jugglers appear alongside the dancers in Act One in ways that complement the scene rather than distract. Ballerinas frequently sit at the side watching the action, helping the audience also to believe that they are present at the ball they observe. In Act Four the tremendous sight of no less than sixty swans creating rippling patterns with their arms in itself signifies the lake.

The standout performance comes from the company's artistic director, Tamara Rojo, as the Swan Princess. She has played the part many times for the Royal Ballet and brings all of her experience to the fore to showcase the perfect blend of precision and panache. Every movement and facial expression are geared to generating a visually stunning effect and a specific emotion so that when, for example, she first encounters Prince Siegfried, her movements both pulsate with rhythmic energy and convey a sense of nervousness that feels entirely swan-like. When she is called upon to play the Black Swan in Act Three, Rojo does evil and seductive just as well, so that she feels more actively complicit in the deception of Siegfried than usual, and not merely her sorcerer father's tool.

Matthew Golding, a guest artist making his role debut as Prince Siegfried, is equally strong. He is not necessarily a flashy dancer, but the smooth, rounded nature of his precise movements have their own impact as he cuts through the air with an almost 'slow motion’ delicacy. It is also pleasing to see the evil Baron von Rothbart played by a dancer (James Streeter) at the height of his game, despite it being predominantly a character role, while Nancy Osbaldeston and Yonah Acosta excel in Act Three's Neapolitan Dance.

Photo: Tamara Rojo as the Swan Princess and Matthew Golding as Prince Siegfried appear with no less than sixty swans in Derek Deane's production of Swan Lake for English National Ballet, © David Jensen.