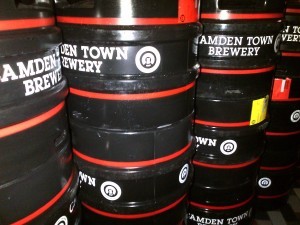 We're approaching the halfway point in the year, and the beer hasn't run out yet! Happy drinking!

Strongroom Bar, Shoreditch. The bar's courtyard-based festival, which proved popular last year, returns with an added dimension — cheese! More than 40 beers and ciders will be on offer, all of which are made in London, and you can either attend a special beer and cheese pairing session with experts, or simply sample your way through the on-site cheese stalls' offering with a pint or two in hand. Full details, including opening and live music times, are available on the Strongroom website.

The Wild Card Brewery Festival at The Warrant Officer, Walthamstow. From 6pm on Thursday, Friday and Saturday you can join the Wild Card Brewery for a celebration of east London beers, and the brewers themselves will be present on Thursday evening to guide you through their range. If you can't make these dates, head to the Warrant Officer on 29 June for the Wild Card Party, which presents real ale, street food and live music to celebrate the culmination of the Appetite food festival.

Beer Mutiny, Arch 402. This isn't so much a traditional festival as a structured tasting. A £15 ticket (or £20 if you want snacks too) gets you an introduction to beer flavours, how we taste and how professional beer tasters (best job ever?) go about their work, followed by the opportunity to sample 10 beers from a regularly-changing menu. The event takes place in the evenings, with daytime slots also available on Saturday and Sunday.

The Drapers Arms, Islington. The pub's festival promises a range of craft beers and ciders, alongside beery snacks and beery food — no specifics are given but anything containing the word beer ought to be tasty!

The Hope, Carshalton. The prodigal pub's 'Firestarter' beer festival will feature beers from most members of the London Brewers' Alliance, alongside other breweries such as Dark Star, Magic Rock and Blue Monkey.

The Bull's Head, Croydon. Fourteen local and rare ciders will be on offer at the pub's cider festival, alongside a range of real ales. Thirty whiskies and food will also be on offer.

Tap East,Westfield Stratford City. Little information is available at this stage, but the microbrewery and bar is due to launch a series of collaborative brews at this two-day festival. A selection of guest ales will also be available.