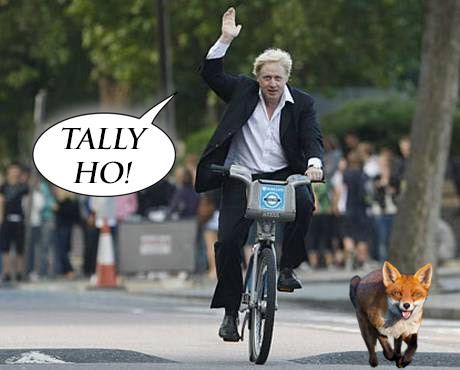 London mayor Boris Johnson has called for the return of fox hunting to cull the capital's roving reynards.

Following a handful of high-profile attacks on small children and household pets, foxes were described as 'a pest and a menace'. The subsequent mass anti-fox hysteria has led to repeated calls for a cull which Johnson seems only too happy to oblige. The mayor said:

"I got wild with anger not so long ago because I thought our cat had been mauled by a fox. I wanted to go out with my 2.2 and blaze away.

"This will cause massive unpopularity and I don't care. I'm pro liberty and individual freedom. If people want to get together to form the fox hounds of Islington I'm all for it"

Given the congestion on London's roads, we think that using cycle hire bikes might be more appropriate than a herd of horses galloping at full chat down, say, the Strand and would mean people with dogs could participate. And instead of air rifles — which could be a hazard for innocent non-fox pedestrians, we'd recommend a large fishing net.

Or people could just stop putting food out for them and call pest control. Except that wouldn't make such a snappy headline for the mayor.